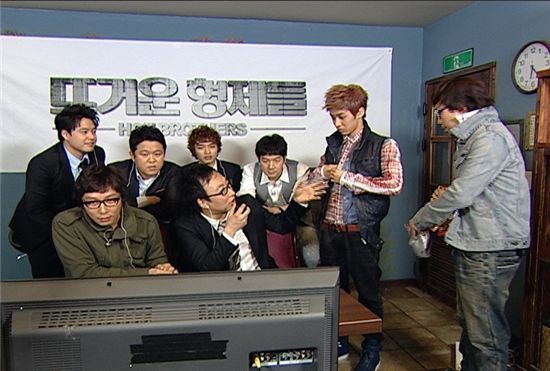 It only aired once and did not reappear for seven weeks. We are talking about a segment named "Hot Brothers" which is part of MBC's variety show "Sunday Sunday Night".And while everyone was waiting for "Infinite Challenge" and "We Got Married" to air, also shown in the same Sunday evening time slot, memories that viewers had of the first episode of "Hot Brothers" were slowly fading away, as well as the possibility that "Sunday Sunday Night" would recover its reputation from its heydays.

But "Hot Brothers" unexpectedly put up a good defense by showing its cast create good synergy even with an outdated mission where four married celebrities starring in the show each paired up with an unmarried celebrity to act as their avatar, and would control them while they are on blind dates. This did well in revealing to viewers every side of each cast member's personality. Noh Yoo-min was stubborn yet tried his best, whereas his controller Kim Gu-ra displayed his typical aloof and snobby character which built up a sense of order amongst the men. Simon Dominic and Han Sang-jin tried hard enough that they were able to seem more than mere props despite it being their first time on a variety show. And youngest member Lee Lee Gi-kwang managed to appease Tak Jae-hoon who still pouted despite being 42 years old, which formed a new form of relationship. But more than anything, the effort that Park Hwi-soon put in was enough to bring tears to viewers' eyes. His conte-style image had landed him only guest appearances on variety shows so far. When Park's gum bled from trying to show a magic trick where tissue comes out from his mouth, the audience is able to realize his potential as a comedian in how he maintains his unique sympathetic and melancholic ambience yet at times manages to turn it into humor.

If the fresh combination of Tak Jae-hoon, Park Myung-soo and Kim Gu-ra manage to carry on the show with the atypical characters it showed in its first episode, the seven-week gap could rather prove to be an advantage for "Hot Brothers". If it continues to do what it has been doing, it will be interesting to see how "Hot Brothers" survives amongst the battle of already male-dominant variety shows.

"[REVIEW] MBC "Hot Brothers" - 2nd episode"
by HanCinema is licensed under a Creative Commons Attribution-Share Alike 3.0 Unported License.
Based on a work from this source