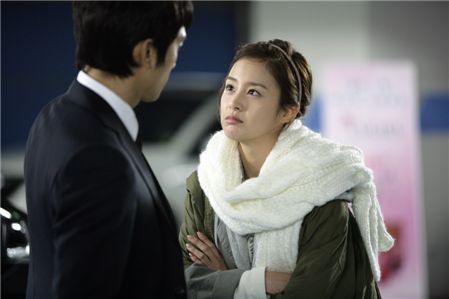 A scene from MBC TV series "My Princess" [MBC]

Kim Tae-hee is a princess -- something that we can easily agree with. But she has become an expert at loving guys one-sidedly, is quite the idiot, is nosy and also so stingy that she will go a long way even to save just a single penny. This is where things become odd. "My Princess" start by dressing main female character Kim with clothes that suit her the best but not with a role we are sure will befit her. And the first episode of this drama went all out to show how charming this 'princess' is -- she boasted the grandeur of a 'royal highness' by wearing a traditional evening garment from the very start of the show, her economic situation was explained by her being a nuisance at the department store, she was seen as the girl who has a crush on a guy, and even pulled off the role of a main female character from romantic comedies who clashes in every way with the male character yet does without feeling an ounce of shame.

Why the vivacious and hard working college student Lee Seul (Kim Tae-hee) so obsesses over money has yet to be explained, raising questions regarding some of her actions but Kim has set her aureole aside and expressed her character Lee Seul as a girl one cannot hate despite her stubborn ways. Director Kwon Seok-jang, who presented viewers with MBC TV series "Pasta" around this time a year ago, has proven through just the first episode that he is talented at portraying slightly slow-witted main female characters in a loveable light.

At the same time however, main male character Park Hye-young (Song Seung-heon) is barely memorable. He gets pulled about by Lee Seul with his lukewarm attitude which is neither warm nor cold. Romantic comedies are about the man and woman constantly bickering before they fall in love so the fun and tension felt from how the two characters are different is a must. That is why we will have to wait to see whether this show will merely end up as the third installment of series "Princess Hours" or become a good romantic comedy under its own name "My Princess".