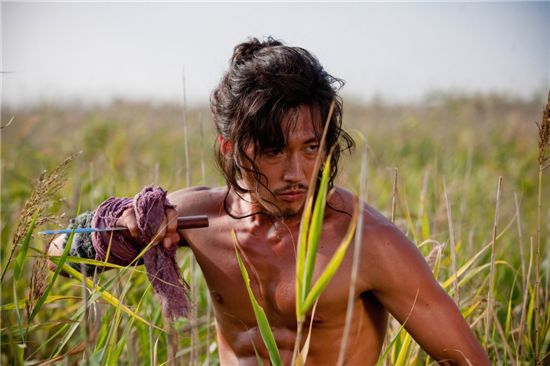 A scene from KBS TV series "The Slave HuntersChuno" [KBS]

The chaser and the chased. TV series "The Slave Hunters" started with the story of the chaser, Dae-gil, played by actor Jang Hyuk. The drama opened with the scene of Dae-gil's chuno gang chasing after slaves on the run and several supporting characters appearing thereafter, but it wrapped up its first episode impressively -- maintaining its focus by concentrating its story on Dae-gil.

The show proves through just a single episode that Dae-gil is a character who is multidimensional enough to lead on the story, as is shown when the image of him as someone considered less than a human being for his job as a cruel and evil man hunting chuno, overlaps with the image of him letting loose the slaves he had caught, and overlaps once again with his past. Unlike most historical dramas, "The Slave Hunters" does not use history as its plot. And then again, it is not a fusion historical drama which takes on the appearance of a historical drama but transcends time. "The Slave Hunters" remains so faithful to history that it is necessary to add a footnote to almost every word the noblemen use but also aims to restore that time period as best it can with its imagination by portraying characters who were not recorded in history. That is probably why the supporting actors, though short-lived, each had substantial presence and a story to tell in detail.

But it is too early to make any judgements about "The Slave Hunters". Its first episode seemed more like part of a large, already-complete picture rather than serving as the basis to a new drama. But it is also true that this first fragment of the drama makes one look forward to the size of the picture in its entirety. If the drama can continue to present each character's story in the same manner and show viewers the moment when everyone's stories fit together to tell a complete story -- to top it off, explain why it is currently telling the story of the slave who ran away -- "The Slave Hunters" will undoubtedly become a drama to be remembered for a long time.

"[REVIEW] Premiere episode of KBS2 TV series "The Slave Hunters""
by HanCinema is licensed under a Creative Commons Attribution-Share Alike 3.0 Unported License.
Based on a work from this source