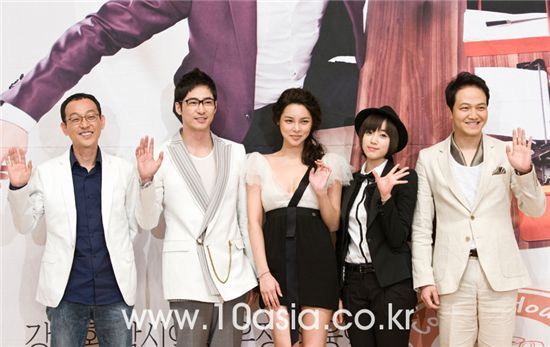 An ounce of romance, another ounce of comedy and three ounces of fantasy are what usually make up a romantic comedy. Thanks to viewers' fantasy that the main character of a drama 'does not have to worry about making a living and has looks good enough to get him by anywhere', Jin-soo (played by Kang Ji-hwan), a young and good-looking free-spirited best-selling novelist who is so fickle that he will decide not to attend his own book signing event for no particular reason, regards an unproperly sharpened pencil as a more serious issue than a signing contract.

But it seems that "Coffee House" was able to start off as a romantic comedy with slightly more of the comedy and less of the fantasy due to scenarist Song Jae-jeong who has penned hit sitcoms such as "Soonpoong Clinic" (SBS) and "High Kick!" (MBC). The doormat which makes a noisy sound when stepped on, the incident where Seung-yeon (played by Ham Eun-jung) gets trapped inside a bathroom and the show's character such as the pretty Eun-young (played by Park Si-yeon) who is a workaholic with a short temper, are examples of Song's talent at effectively weaving in sitcom-like elements into a drama.

Unlike Jin-soo who is not just a 'cold-hearted man living in the city' but rather polite on the outside yet a neat freak and almost-perfectionist who rarely expresses how he feels, Seung-yeon's character will need to do more to convince viewers that she is a typical 'cheerful-and-nothing-can-bring-me-down' female character who knows how to do more than just be a nuisance. But the light development of the scenes and cheerful tone are worth giving the show a slightly above average score. In contrary, the overly-zealous narration and mood-killing ending song account for points taken off for the drama. Overall, however, Song Jae-jung seems to have made a relatively refreshing start in his attempt to execute his desire to "cut down on the comedy and do more with the imagery while working on director Pyo Min-soo who wants a much more cheerful story compared to the past".

"[REVIEW] SBS TV series "Coffee House" - Episode 1"
by HanCinema is licensed under a Creative Commons Attribution-Share Alike 3.0 Unported License.
Based on a work from this source