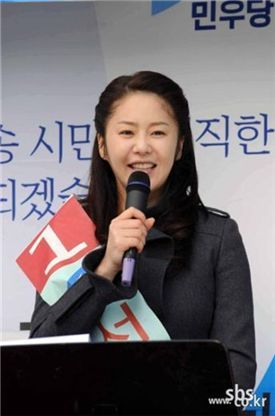 Go back to the basics -- that was the phrase most frequently used in the final episode of SBS drama "Daemul - Big Thing". Tae-san (Cha In-pyo) who was at the crossroads of his political life mends his ways after talking with President Seo Hae-rim (Go Hyun-jung) and then the former-president Baek Sung-min (Lee Soon-jae). However, the one that most needed to be reminded of that phrase was probably the drama itself.

The reason that viewers responded enthusiastically to this series in the first place was that they saw the new possibility of a political drama actually combining well with fantasy. The one-person demonstration that Seo Hae-rim staged in the early part of the story -- which will no doubt be the most memorable scene of the year -- was where the very spirit of the drama was, a wonderful substitute to vent our frustration toward the incompetency of the government. Hae-rim had everything that the 2009 film "Good Morning President" had fantasized about: the good looks of young President played by Jang Dong-gun, the compassion of old president played by Lee Soon-jae and motherly leadership of female president played by Go Doo-shim. And at her side was prosecutor Ha Do-ya (kwon Sang-woo) whose zeal equaled that of the prosecutor from the 2008 film "Public Enemy" who cannot wait to strike back on corrupted politicians. The more realistic the corrupted politicians in the drama sounded, the larger the expectation grew for the catharsis that would be felt from their stand-offs.

However this wonderful encounter between fantasy and reality started to dwindle until it became a simplistic fight between good and evil, losing all the tension that any good political dramas should have. The moment "Daemul - Big Thing" betrayed its own line in the story "Politics is not about simple fight between good versus evil but trying to bloom 51 percent of goodness over 49 percent of evil", the show became useless in neither becoming a useful fantasy which fulfills the thirst felt from real politics or digging deeply into the truth of the society. What remained in the final episode instead was the typical Cinderella fantasy of one middle-aged woman who got her happy ending.

Even then, there were still some unforgettable moments. This is because what Hae-rim said in her goodbye speech as a president in the drama, that it was also our fault that present politics turned out to be as it is, our failure to make a timely response and our disinterest toward 'principle and conviction' that gave silent permission for unjust politics to reign, was painful reminder of the truth. That speech alone makes it worth to show a proper goodbye to the drama. So with some feelings of regret, goodbye, Ms. President.

"[REVIEW] SBS TV series "Daemul - Big Thing" - Finale Episode"
by HanCinema is licensed under a Creative Commons Attribution-Share Alike 3.0 Unported License.
Based on a work from this source