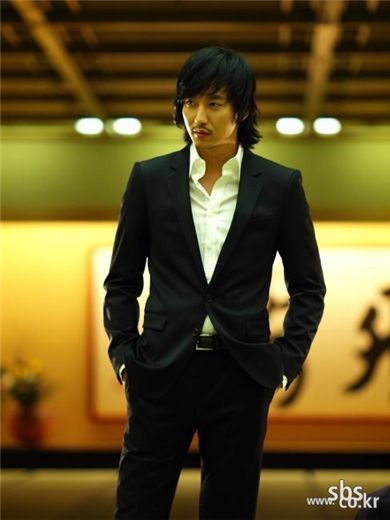 "Where am I heading toward -- heaven or hell?" The character Gun-wook (played by Kim Nam-gil) made his entrance into the drama like an angel who fell from heaven. And in the last scene of the episode, he fell deep into the water as if he had fallen from hell. The premiere episode of SBS TV series "Bad Man" was all about this fatally charming man who is hard to clearly define -- he has the face of an angel and, at the same time, of a devil.

The reason that Gun-wook approaches the character Monet (played by Jung So-min), the youngest daughter of the conglomerate Haeshin Group, is because he wants to plot revenge on the family for the brief period that he lived as Hong Tae-sung, the second son of Haeshin Group. Although the desire of the main female character Jae-in (played by Han Ga-in), who wants to gain power, is unveiled in a rather sophisticated way, the drama makes no special effort to explain the basic storyline and relationships between its characters. Instead, it focuses on using fancy visual work, like a music video, to repeatedly show a man who is scarred on both the inside and outside, and the women who are captivated by him. The images of his downfall, death and wounds are played out in variated forms. Stories that were divided up like pieces of a puzzle only fall into place at the end of the episode when the character reflects back on his past.

In this unfriendly story, the bad boy character Gun-wook in "Bad Man" captivates every woman that he meets -- from a young child to older women to younger women. There are moments when the drama goes too over-the-top in describing the process. But aside from everything, if the producers are focusing on how to portray the extreme level of charm that this bad boy had, they have definitely succeeded. And in the second episode, actor Kim Jae-wook, who played a homosexual character in his previous drama but is still devilish in his charms, appears as the current Hong Tae-sung who shares the same fate with Shim Gun-wook and becomes his rival in everything. These two actors are enough to bring a whole ton of devilishness to the drama. Whether the devilish charms of the characters will be enough to lure viewers into watching the drama "Bad Man" -- well, we will have to wait and see about that.

"[REVIEW] TV series "Bad Man""
by HanCinema is licensed under a Creative Commons Attribution-Share Alike 3.0 Unported License.
Based on a work from this source