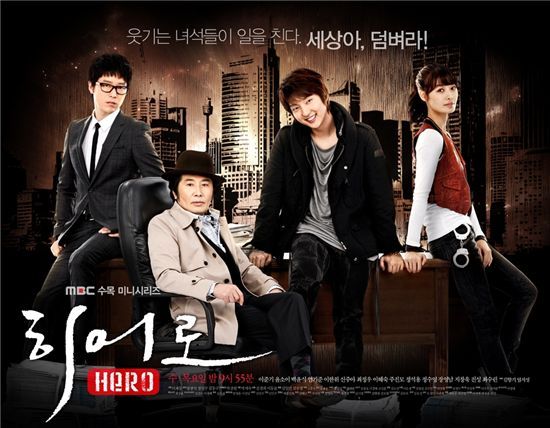 "We are looking for Yongduk Ilbo". The aforementioned phrase which the reporters of Yongduk Ilbo took turns wearing as a sign on their shoulders during their one-man demonstration, seemed like the last heartfelt message that "Hero - Drama" had tried so hard to deliver to the world outside. Like the simple and honest drama that it had been from the beginning, absolute evil was punished in the final episode, "truth won" and every conflict became solved. It was a naive -- almost boring -- ending but when that phrase came up on the screen, viewers might have experienced that rare moment where the message cries out to your heart so desperately that the less-than-sophisticated methods that were used in trying to deliver the actual story, do not matter to you.

But it was disappointing that "Hero - Drama" was unable to find a way to get its heartfelt message across on more than a few occasions. The drama had a clear story, appealing characters and a serious theme -- the very reasons that viewers could not empathize with the show. Considering the fact that the story shined with the most shameless and hilarious energy when Yongduk Ilbo had been Monday Seoul, it was all the more disappointing because "Hero - Drama" had all the potential, in the beginning, to be more dramatic. If the drama had disguised its message in a more seasoned and less honest way -- just like its original title "Suspicious Heroes" -- the show's catch phrase "Weird guys change the world" would have been more powerful.

Despite such shortcomings, "Hero - Drama" stuck to its original topic to the end and was thus able to deliver a thread of hope as its ending. The ending about hope was all the more important because the story had hinted of a tragedy from a line delivered by Do-hyuk (played by Lee Joon-gi) -- that the reason Hye-seong's (played by Uhm Ki-joon) father committed suicide was "not because he was weak but because he had no hope". In "Hero - Drama", the characters say that "people are more important than anything" and that "each person" counts. The reason they believed that and called it hope is so that they would not repeat such a tragedy. Like that someone who dreamed about the beautiful world that people live in.

"[REVIEW] TV series "Hero - Drama""
by HanCinema is licensed under a Creative Commons Attribution-Share Alike 3.0 Unported License.
Based on a work from this source