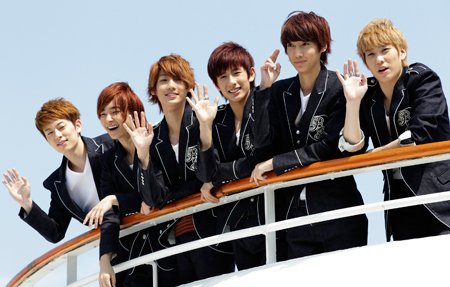 The boy group's agency said that they have signed a contract with Bing Entertainment, an agency based in Japan, and will release their first single on Aug. 22. Famous Japanese musicians such as B'z, ZARD and Kuraki Mai belong to the same agency.

The group consists of six members ― Donghyun, 23, Hyunseong, 18, Jeongmin, 18, Youngmin, 17, Kwangmin, 17, and Minwoo, 16. They debuted in Korea in 2011 with their first single titled "Boyfriend".They have won a number of accolades including the Rookie Award at the 21st Seoul Music Awards and Best New Artist at the 26th Golden Disk Awards.

"We are thrilled to start our career in Japan but we are nervous at the same time", said Donghyun, the leader. "We finished recording last week and our song Be My Shine is perfect for the summer", Kim added. The song was co-produced by Japanese lyricist Matsui Goro and Korean composer duo Sweetune.

Videos recorded at the press conference will be broadcast via four major Japanese video websites on Tuesday from 8 p.m. onwards.

The Korean boy group plans to release an album and kick off a concert tour in Japan next year.