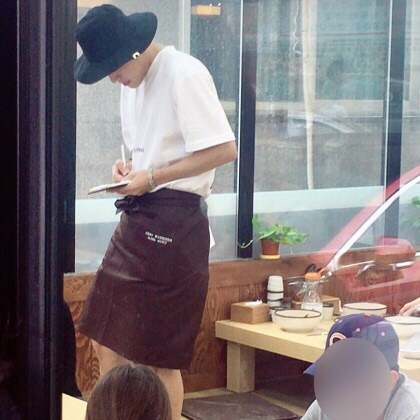 In the early morning of May 10 (KST), the actor who is currently on leave from military service, posted his first ever instagram message following his enlistment on September 11, 2017.

Long time ^_^
They say when a man comes back from the military they either treat their parents better or grow up, but I guess I'm neither.
I feel I can't call my parents often enough and it hurts me.
This Parents' Day, I wondered what I can do for my parents and decided to help my father out at his noodle store on my vacation.
I won't just work, but this is a chance for me to be a good son to my parents (like everyone said I should).
The noodle store isn't so big so there's a limit to the amount of noodles we can sell per day.
Still, we will treat the ones who come with the best of service and I'll unload a little of the burden I had of not being a good son to my father.
Thank you.

Fans excitedly welcomed the surprise from the heartthrob. The message was unexpected due to what the actor posted on enlistment day.

"I think this Instagram post will be the last one that I post in my 20s. Because I don't post a lot.. and when I come back I'll be in my 30s. I'm fully aware that 30 is not that old, but I'm trying to give a little meaning to this being the last post of my 20s".

Most fans responded by expressing their love, well-wishes and support to Kang Ha-neul as he fulfills his duty to his country, and many conveyed their admiration to the actor for his sincerity, love and respect for his parents.

Despite his short break away from military life, he took time to help as a part-time worker at his father's chicken noodle restaurant as an "apology gift" during Parents' Day on May 8.

In addition, Kang Ha-neul also announced that he will work again at the restaurant on Friday (May 11) afternoon. not only to fulfill his duty as the eldest son, but also to meet his fans!

Now, who wouldn't love this guy? He is such a beautiful person inside and out.

Kang Ha-neul is currently serving as a member of the Republic of Korea's military police motorcycle unit at the Army Heaquarters in Gyeryong City. He is expected to be discharged on June 10, 2019.

"[riversky's Take] Kang Ha-neul Surprises Fans With First Instagram Update After Enlistment"
by HanCinema is licensed under a Creative Commons Attribution-Share Alike 3.0 Unported License.
Based on a work from this source