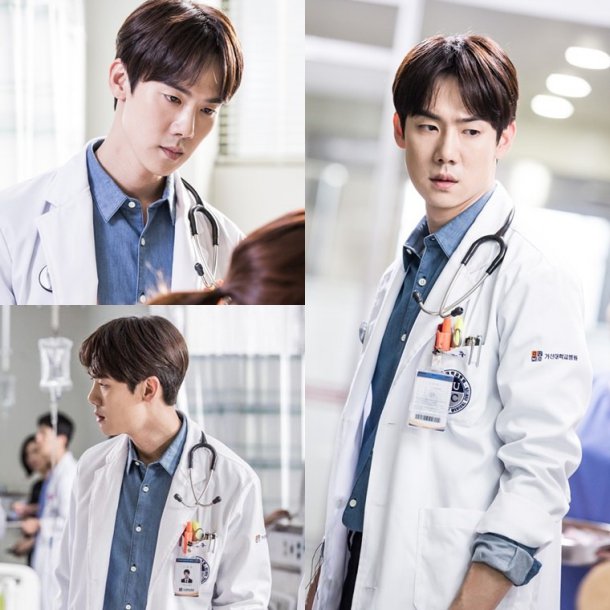 Yoo Yeon-seok is a brilliant doctor who has never lost the top title before and an bad-tempered man named Kang Dong-joo. He experiences the biggest risk of his life until he meets Kim Sa-bu (Han Suk-kyu) and Yoon Seo-jeong (Seo Hyun-jin) in a hospital on the outskirts of the city.

Pictures of the actor dressed as Doctor Kang were released on the 19th. Yoo Yeon-seok looks cold without a hint of humor in his face. He's wearing a stethoscope around his neck which makes him look professional and good looking.

These pictures were taken on the set of "Romance Doctor Kim Sa-bu" on the 29th last month. Yoo Yeon-seok arrived on set and said his greetings to everyone on it. He then got into practice mode with his script book which had scribbles written all over it.

Yoo Yeon-seok expressed his excitement in being in "Romance Doctor Kim Sa-bu" and said it was an honor to be able to work with Han Suk-kyu and Seo Hyun-jin.

Meanwhile, "Romance Doctor Kim Sa-bu" is based in a run-down hospital in which Kim Sa-bu, Kang Dong-joo and Yoon Seo-jeong create a story. The hospital withstands all sorts of power and influence of money and becomes one of the best hospitals in the nation.

The first episode can be seen on the 7th of November.

""Romance Doctor Kim Sa-bu" Yoo Yeon-seok, a bad-tempered doctor "
by HanCinema is licensed under a Creative Commons Attribution-Share Alike 3.0 Unported License.
Based on a work from this source