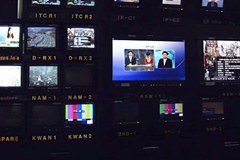 It looks like North Korean residents can continue to receive TV programs from South Korea.
A government official said Tuesday that South Korea will maintain an analog TV system for broadcasts sent to North Korea.
The official said that participants agreed, in a meeting with related agencies, to maintain an analog system for TV transmissions to Pyongyang, so that residents there can continue to watch programs made by local stations.
North Korean residents are banned from watching South Korean TV, but defectors say that people have gained access through the proliferation of foreign-made TV sets and the lack of any effective means to enforce the ban.
South Korea recently switched to a digital broadcasting system. while North Korea still uses an analog system.

"S.Korea to Keep Analog System to Send TV Programs to N.Korea"
by HanCinema is licensed under a Creative Commons Attribution-Share Alike 3.0 Unported License.
Based on a work from this source