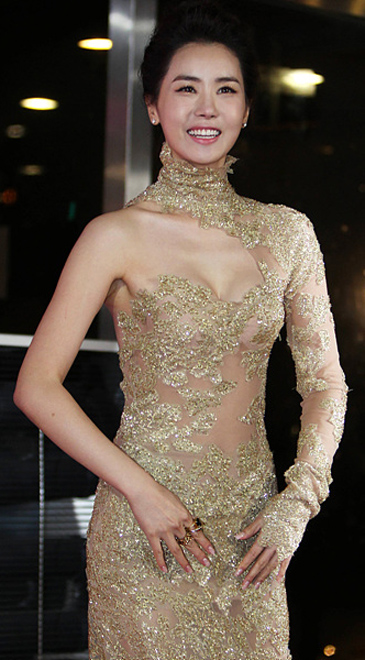 Recently Lee has drawn a number of Chinese fans.
She boats of 200,000 followers for her Chinese-language Twitter site, her management company recently told local media.

The company said that it took four weeks for her to gather over 200,000 Chinese fans on Wei-Bo site.

Lee Da-hae was born as Byun Da-hye on April 19, 1984.
She is a South Korean actress who has appeared in a number of Korean television series and dramas such as My Girl and Green

Lee Da-hae and her family moved to Sydney, Australia, for five years, and graduated from Burwood Girls High School before debuting as an actress in Korea. She now lives with her mom in Seoul while her dad and brother still reside in Sydney, Australia. Besides acting, Lee Da-hae's other passion is traditional Korean dance. She has performed many times in front of small amount of audiences in Australia.

In 2008, following Yoon Eun-hye's signing event for Zipel refrigerator, Samsung continues to hold another signing event for those who buy Kimchi Hauzen freezer. And the signer at this time is popular actress Lee Da-hae. Ever since Lee became Hauzen freezer's model, the company's sales have increased significantly, and it surpassed the same type of freezer from its rival LG. She was also later cast in the 2008 hit action drama "East of Eden" along side Yeon Jung-hoon and Song Seung-heon. Not much later Lee was sent to the emergency room. She had collapsed because her busy schedule along with her excessive workouts at the gym resulted in severe fatigue. But Lee Da-hae had shockingly announced her departure from the drama due to health reasons and decided to leave in Episode 40, which was aired January 14. Lee's character, Min Hye Rin, will embark for overseas studies in America, effectively marking the exit of Lee Da-hae in a natural manner and was eventually replaced by Hwang Jung-eum.

In 2009, Lee Da-hae has accomplished a number of things. She has been on vacation with her mother in January, moved to J. Tune Entertainment where she worked under the same roof with Rain and modelled for Swarovski Spring/Summer Collection. She has also filmed the scandalous love-themed music video "Dance For Two" with Taiwanese singer, rapper, actor, Wilber Pan.

Lee Da-hae is set to make her film debut in a 3D Korean movie titled 'String Song', she will star alongside Lee Sung-jae and Ahn Sung-ki. She plays the role of the female lead named Ara, a dancer.