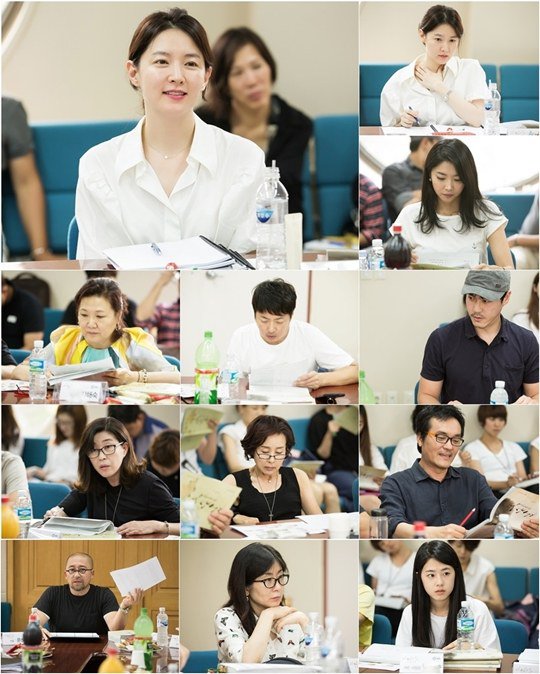 The script reading for the SBS drama "Saimdang: Light's Diary" was held.

Lee Young-ae has come back with this drama for the first time in 11 years but she didn't leave a gap. She read her lines with passion and increased everyone's trust in her. She even shed off her existing image when she read lines for Seo Ji-yoon, the modern day character that she plays.

Kim Hae-sook who plays Lee Young-ae's mother-in-law, said, "It doesn't seem to me that she was away for so long. I wonder what she did without acting when she's so good". Everyone else agreed with her and even the middle aged cast did their parts well. Yoon Da-hoon who plays Saimdang's husband Lee Won-soo lifted up the atmosphere with his wit.

Park Hye-soo who plays Saimdang's younger version, had all eyes on her and even during break times she didn't forget to get advice from her acting seniors.

Lee Young-ae said, "Saimdang: Light's Diary" is the first SBS drama I'm starring in since the year 2000. I am so honored to be here and I will do my best". Kim Hae-sook said, "There are so many friendly faces and I'm happy to be reunited with the producer".

Yoon Da-hoon said, "I won't forget the mindset I had when I first debuted and always think of myself as a rookie and do my best".

"Saimdang: Light's Diary" is a story retold about genius artist Saimdang's passion for art and love. It is produced by Yoon Sang-ho and written by Park Eun-ryeong.

Also famous for Lee Young-ae and Song Seung-heon's appearance, "Saimdang: Light's Diary" was presold to several Asian countries like Thailand, Singapore, Indonesia and others. The drama starts making this October and will be released next year on SBS.

""Saimdang: Light's Diary" first script reading session"
by HanCinema is licensed under a Creative Commons Attribution-Share Alike 3.0 Unported License.
Based on a work from this source