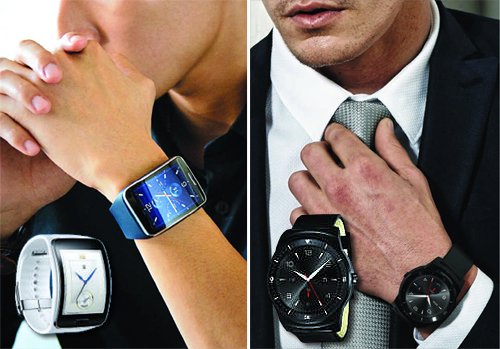 Samsung and LG both unveiled new smartwatches on Thursday. They are expected to be available in shops sometime in October.

The Samsung Gear S is an advance on the previous model by containing its own mobile communications chip. Its predecessors need to be hooked up to a smartphone to make calls or exchange texts, but the Gear S can carry out the functions independently.

The latest products are also aimed at addressing complaints from some users that smartphones have grown too unwieldy.

LG's G Watch R looks more like a handsome timepiece than a smart device. Using a plastic OLED display, LG claims it has succeeded in creating the world's first round smartwatch.

The metal frame and leather strap add to the good looks of the device, which is also capable of functioning for 30 minutes under 1 m of water.

"Samsung, LG Unveil New Smartwatches"
by HanCinema is licensed under a Creative Commons Attribution-Share Alike 3.0 Unported License.
Based on a work from this source