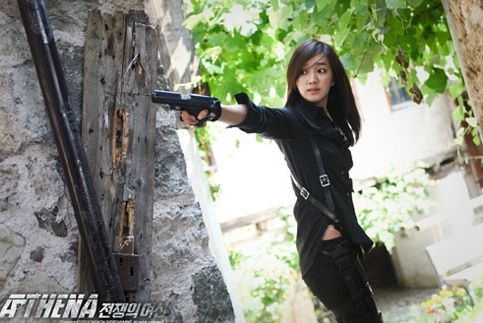 SBS series "ATHENA" scored the highest among Mondays and Tuesdays prime time TV series for the second week in a row but saw a considerable drop in its ratings.

According to data by Total National Media Statistics (TNmS), spy-action thriller "ATHENA" posted an average rating of 20 percent this week, a 6.5 percent plunge from its previous two episodes.

The show scored lower on AGB Nielson Media Research's survey as well, lodging a three percent drop in average rating from last week to yield a score of 18.9 percent.

The drama starring Jung Woo-sung, Soo Ae, Cha Seung-won and Lee Ji-ah is a spin-off of KBS action series "IRIS" (2009) that deals with world of government conspiracy, spies and terror.

Meanwhile, MBC series "Queen of Reversals" has seen its ratings gain by one percent every day since SBS series "Giant" completed its run two weeks ago.

This week, the drama reported an average rating of 13.9 percent on TNmS' survey and 14.9 percent on AGB's poll, about a one to two percent rise in rating from last week.

"Queen of Reversals", starring Kim Nam-joo, Jung Joon-ho, Park Si-hoo and Chae Jung-an depicts on the joy, sorrow and struggles in the workplace through business projects, rivalry between co-workers and issues of lay-offs.

KBS romantic comedy "Marry Me, Mary!" continued to remain the same in overall performance, posting an average viewership rating of 5.9 percent on TNmS' survey and 6.5 percent on AGB's poll, which is only about a 0.1 to 0.3 percent rise from last time.

The series starring Moon Geun-young, Jang Keun-suk and Kim Jae-wook is about a double contractual marriage between a girl and two guys.

"SBS "Athena" leads for 2nd week on primetime chart "
by HanCinema is licensed under a Creative Commons Attribution-Share Alike 3.0 Unported License.
Based on a work from this source