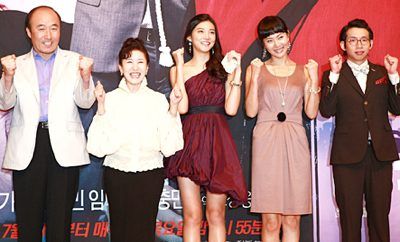 Being a working mother in Korea involves many responsibilities ― from taking care of the children and supporting the family to managing work ― and sometimes it just seems too much. To sympathize and give these mothers a break from all the hustle, SBS is airing its new drama "Working Mom" tonight.

Starring Yum Jung-ah ("A Tale of Two Sisters", 2003) as a businesswoman and mother, the drama depicts the life of Choi Ga-young. Choi, who was an attractive career woman, is now a full time mother of two boys with husband Park Jae-sung, who is two years younger. Park is played by Bong Tae-gyu ("Ssunday Seoul", 2006). She is torn between the responsibility of being a mother, wife, and herself.

This is the first drama for Yeom in four years. The actress is a real life working mom, who recently gave birth to a baby girl.

"I love looking after my daughter, but I realized that I missed working. Although I'm here at work, I miss her and sometimes feel sorry for not being there. I believe it's an emotion that many working moms go through", she said at the press conference promoting the drama.

Bong plays the troubled yet charming Park, and when asked about his image as a comical character, he laughed, explaining that he was the one who was actually an average guy.

"There are many women who dream of younger boyfriends who are sweet and handsome, but I think this is just about five percent out of all the older women and younger men couples. I chose this character because he seemed real, he's not good-looking or anything. He's real", Bong said.

The story unfolds as Choi, determined to return to her glory days as a businesswoman, decides to leave her children with someone and start working again. It would have been her mother, but she died a few years ago and now the only way is to persuade her father to get married.

Through ups and downs, Choi's father gets married and all seems to go smoothly. However, Choi's plan takes a turn as her stepmother says that she will not take care of her grandsons, and the quest to win back her job, her husband who is secretly dating his fellow colleague, begins.

The drama fits into the real world as many grandmothers these days, in fact, refuse to baby-sit their grandchildren, thus putting more young working moms at a crossroads between work and their kids.

"SBS Drama to Spotlight 'Working Moms'"
by HanCinema is licensed under a Creative Commons Attribution-Share Alike 3.0 Unported License.
Based on a work from this source