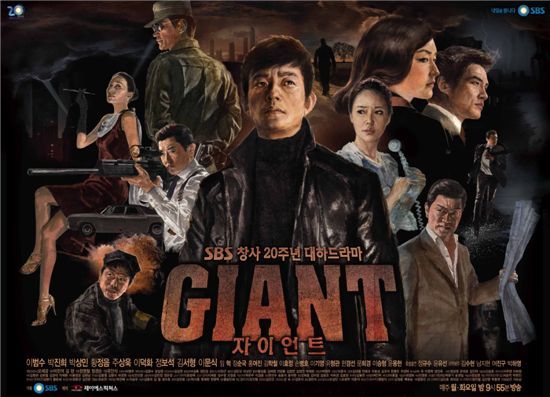 SBS series "Giant" finished its run on December 7 while remaining the nation's most-watched Monday and Tuesdays show for 10 consecutive weeks, according to data by Total National Media Statistics (TNmS) on Wednesday.

TNmS' statistics showed that "Giant" marked an average viewership rating of 36.7 percent this week, posting a mark of 40.1 percent in particular for its finale episode yesterday, the first time for the show to breach the 40 percent mark. AGB Nielson Media Research said "Giant" scored an average score of 35.4 percent.

The story, set mostly around the times of development era in Korea from late 70s to 80s, depicted the corrupted side of capitalism through the confrontation of the villainous Cho Pil-yeon (Jung Bo-suk) who is determined to do anything for power and money and the three siblings who take revenge for their father's death and separation of the family.

In the final episode, the three siblings finally get their revenge but not without a loss as Sung-mo, the eldest who got shot in the head, dies during surgery.

MBC series "Queen of Reversals" that came second, showed no signs of improvement from last week, reporting an average rating of 9.3 percent on TNmS' survey and 9.8 percent on AGB's poll.

The drama starring Kim Nam-joo and Jung Joon-ho as husband and wife is a drama that portrays the real-life situation in the workplace and marriage accompanied by romance and jealousy surrounding the couple.

KBS series "Marry Me, Mary!', the last in the race, continued to perform weak in terms of ratings, yielding an mean viewership of 5.3 percent on TNmS' survey and 6.8 percent on AGB's chart.

The drama starring Moon Geun-young, Jang Keun-suk and Kim Jae-wook is a story of a girl mired in double contractual marriages by her nagging father.

"SBS "Giant" completes run after ruling TV charts for 10 weeks "
by HanCinema is licensed under a Creative Commons Attribution-Share Alike 3.0 Unported License.
Based on a work from this source