SBS "Giant" continues to stay at No.1 on weekly TV charts 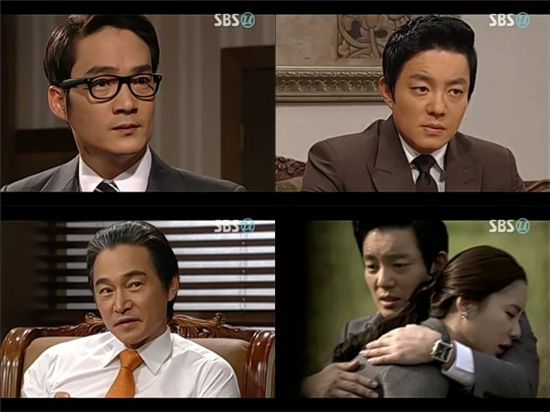 SBS has placed all three of its prime time dramas on top of the weekly TV chart between November 15 and 21 with "Giant" at the lead of the pack.

Data by National Multimedia Statistics (TNmS) revealed that "Giant" topped the weekly TV chart once again with an average viewership rating of 30.5 percent, remaining the nation's most-watched show for the seventh week in a row.

SBS series "The President", the ruler amongst Wednesday and Thursday prime time shows, ranked second with an average rating of 24.7 percent.

KBS variety show "Happy Sunday", the No. 2 show the previous week, slid down to third place with an average rating of 23.5 percent

Figures by AGB Nielson Media Research also yielded similar rankings for the programs with "Giant" topping the list with an average viewership rating of 29.5 percent followed by "All About Marriage" ("Marry Me, Please") with 25.8 percent rating, and "Daemul - Big Thing" with 25.6 percent rating.

Other programs that made the top 10 were "Happy Sunday", "Smile, Dong-hae", "Steel Heart", and the same two aforementioned Guangzhou Asiad games. 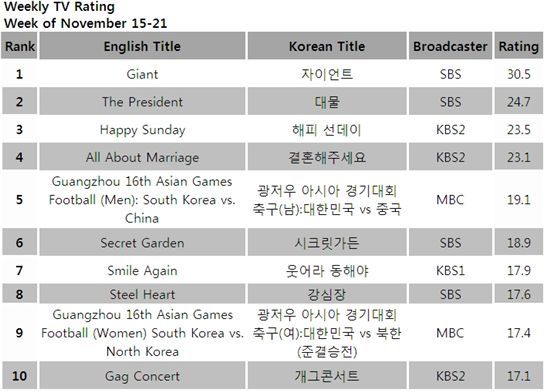 "SBS "Giant" continues to stay at No.1 on weekly TV charts "
by HanCinema is licensed under a Creative Commons Attribution-Share Alike 3.0 Unported License.
Based on a work from this source