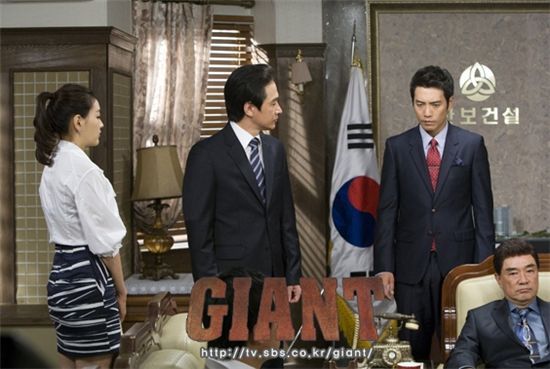 SBS Series "Giant" was ranked on the top of the weekly TV chart for straight nine weeks as of last week.

SBS "Giant", also the front runner of Monday's and Tuesday's prime time series, marked 32.3 percent in terms of average viewership rating to take the No.1 spot on the weekly TV chart of Total National Media Statistics (TNmS) from November 29 to December 5.

The 60-part drama is a story about three separated siblings who seek revenge for their father's death after growing up to become an agent of Korean Intelligence Agency, a successful businessman and a famous singer.

KBS weekend series "Marry Me, Please" ("All About Marriage"), a family drama that depicts the life of four married couples, climbed up two steps to claim second place on TNmS' chart with an average mark of 27.4 percent.

KBS2' "Happy Sunday", so far the most popular variety show in Korea, staggered slightly from last week, its rating dropping by one percentile to 24.7 percent.

Prime time SBS dramas "Secret Garden" and "Daemul - Big Thing", the former aired on weekends and the latter on weekdays (Wed-Thur), posted a score of 24.4 percent in average viewership, landing together on fourth place on the chart.

A survey by AGB Nielson Media Research also displayed similar results for the top two programs, placing "Giant" at No.1 with an average rating of 32 percent and "Marry Me, Please" ("All About Marriage") in second with 28.9 percent.

Coming in third on AGB's survey simultaneously were weekday dramas "Daemul - Big Thing" and "Smile, Dong-hae", that both scored an average 25.2 percent rating. 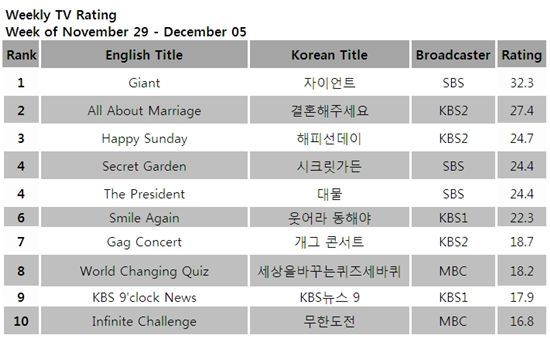 "SBS "Giant" crowned winner of TV charts for 9th week "
by HanCinema is licensed under a Creative Commons Attribution-Share Alike 3.0 Unported License.
Based on a work from this source