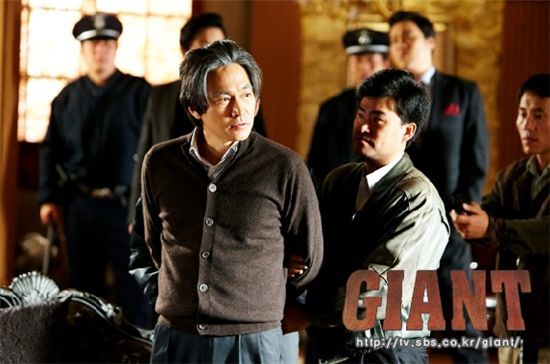 SBS drama "Giant", which had stayed the nation's most-watched show for the past 10 weeks, finished its run last Tuesday atop weekly TV charts, according to data by Total National Multimedia Research (TNmS) released Monday.

TNmS indicated that the Monday and Tuesday's prime time show scored an average viewership rating of 36.9 percent during the week of December 6 to 12, its finale episode on Tuesday lodging a rating of 40.1 percent to make it the first time for the drama to breach the 40 percent mark.

"Giant" a 60-part prime time series starring Lee Beom-so, Park Jin-hee and Joo Sang-wook, had received much attention for its frank description of the chaotic times of modern Korea back in the 70s and 80s through the eyes of three siblings separated when young but reunited to take revenge on a merciless businessman-turned-politician responsible for the death of their father.

SBS weekend series "Secret Garden" jumped from fifth to second place this week with an average rating of 27.5 percent.

A romantic comedy starring Ha Ji-won, Hyun Bin, Yoon Sang-hyun and Kim Sa-rang, "Secret Garden" is a romantic story with a magical twist which leaves a guy and a girl to change souls and are forced to deal with events that come after.

KBS2 drama "Marry Me, Please" ("All About Marriage") climbed up a step to reach third place on TV charts last week with an average mark of 27.1 percent, about a two percent gain from the previous week.

The drama starring Kim Ji-young, Lee Jong-hyuk, Oh Yoon-ah, Baek Il-sub, and Go Doo-shim depicts on the married life of four couples through the relationships between couples, in-laws and friends.

Meanwhile AGB Nielson Media Research's poll reported an average viewership rating of 25.6 percent for "Giant", followed by"Marry Me, Please" ("All About Marriage") with 28.6 percent, "Daemul - Big Thing" with 26.8 percent", and "Smile, Dong-hae" with 26.8 percent and "Secret Garden" with 24.9 percent. 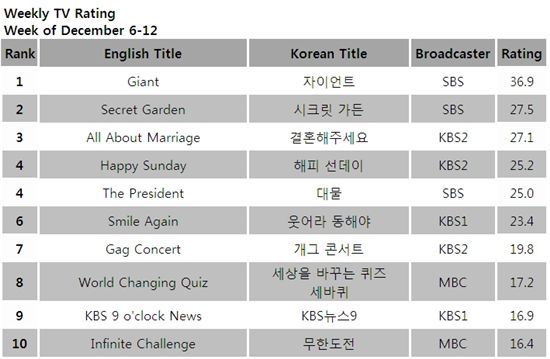 "SBS "Giant" ends run triumphing on TV chart"
by HanCinema is licensed under a Creative Commons Attribution-Share Alike 3.0 Unported License.
Based on a work from this source