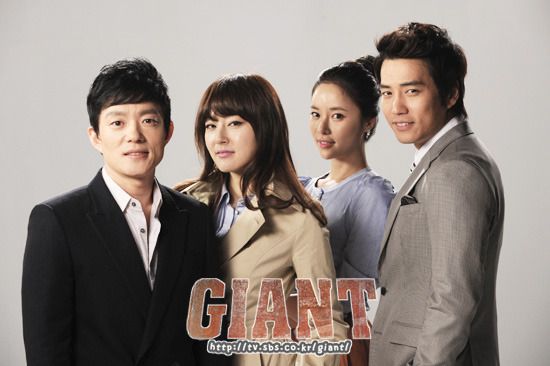 Data by Total National Multimedia Statistics (TNmS) on Monday showed that "Giant" topped its survey once again with an average viewership rating of 29.1 percent during the week of November 1 to 7, although the figure slid by a slight 0.3 percent compared to its previous week.

The drama which airs on Mondays and Tuesdays deals with a story of three siblings separated when young but coming together later on in their life to confront people that threatened their family in the past.

Following behind "Giant" was KBS weekend drama "Marry Me, Please" ("All About Marriage") with an average rating of 26.5 percent.

The drama, which looks into the meaning of marriage and true love through the lives of four couples living under the same roof, saw its position on TNmS' poll rise from third to second place.

Meanwhile, SBS drama "Daemul - Big Thing" which claimed the No.2 spot last week, slipped to third place with an average mark of 24.4 percent, falling from the former week's figure of 25.5 percent.

The drama that criticizes and satirizes the world of politics through one woman's quest for justice, stars top Korean actors Go Hyun-jung and kwon Sang-woo.

Other popular shows and dramas that were included in the weekly top 10, in order, were "Life is Beautiful" (SBS), "Gag Concert (KBS)", "Infinite Challenge (MBC)", "Amazing People Caught on Camera (SBS)", and "Steel Heart (SBS)".

AGB Nielsen Media Research reported similar numbers for its top three TV shows; "Giant" in first place with an average rating of 28.9 percent, "Marry Me, Please" ("All About Marriage")in second with 28.3 percent and "Daemul - Big Thing" in third with 25.2 percent. 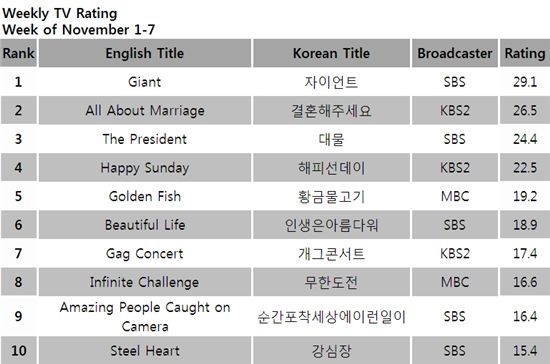 "SBS "Giant" tops weekly chart for 5th week"
by HanCinema is licensed under a Creative Commons Attribution-Share Alike 3.0 Unported License.
Based on a work from this source