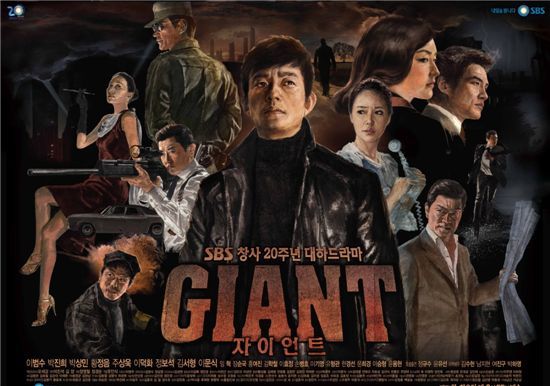 According to ratings disclosed by TNmS (Total National Multimedia Statistics) on Monday, the Monday and Tuesday primetime drama scored an average viewership rating of 29.4 percent during the week of October 25 to 31.

"Giant", set in the late 70s to 80s, tells of the story of separated siblings coming together for revenge after going through much trials following the death of their father.

Trailing behind at No.2 was SBS' "Daemul - Big Thing" which revolves around a woman who becomes Korea's first female president, with an average rating of 25.5 percent.

The show, starring top Korean actors Go Hyun-jung and kwon Sang-woo, has been boasting high ratings since the beginning of its run.

KBS2 drama "Marry Me, Please" ("All About Marriage") that portrays the life of four married couples landed third on the chart with an average mark of 24.6 percent.

SBS drama on love and marriage "Definitely Neighbors" followed closely in fourth place with a rating of 22.7 percent and SBS variety program "Happy Sunday" was the only non-drama to make it to the top five of the chart with a score of 22.5 percent.

SBS "Giant" also came on top of AGB Nielson's weekly statistics with a figure of 28.7 percent. "Daemul - Big Thing" came in second with a rating of 26.4 percent and KBS2's drama "All About Marriage" in third with 26.2 percent. 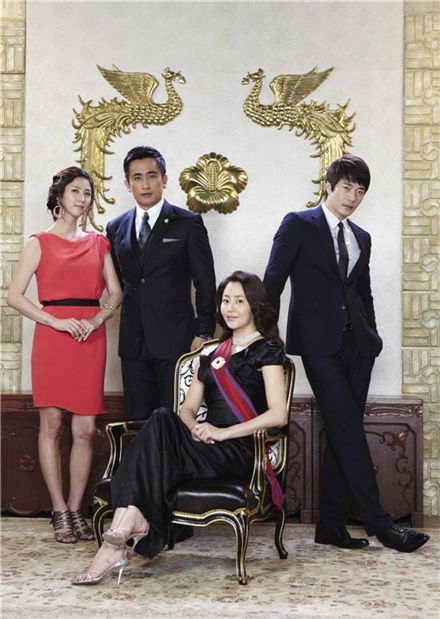 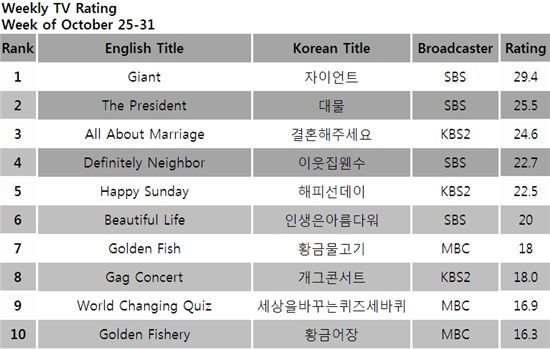 "SBS series "Giant" maintains grip on weekly TV charts"
by HanCinema is licensed under a Creative Commons Attribution-Share Alike 3.0 Unported License.
Based on a work from this source