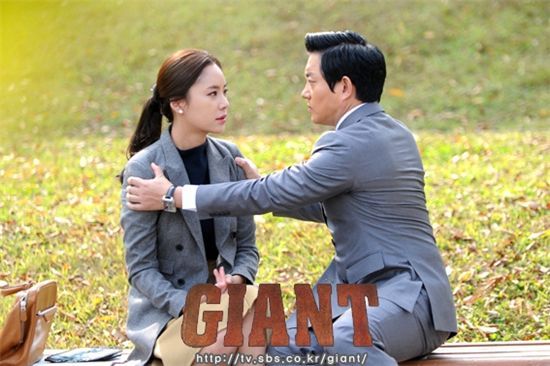 SBS series "Giant" finally breached the 30 percent mark in viewership ratings this week while maintaining its position at No.1 among prime time series for the ninth week in a row.

According to data released on Wednesday, "Giant" reported an average rating of 32.2 percent on Total National Multimedia Statistics' survey and 32 percent on AGB Nielsen Media Research's poll, making it the first time the drama went past the 30 percent mark on both ratings charts.

The 60-episode drama starring Kim Beom-soo, Park Sang-min and Hwang Jung-eum tells a story of three siblings separated when young and reunited some 20 years later to avenge for their father's death against the backdrop of industrial era of Korea in the 70s and 80s.

MBC's "Queen of Reversals" which came next, yielded an average viewership rating of 9.6 percent, a slight 0.4 percent gain from last week. The drama performed weaker on findings by AGB with a 9.6 percent rating, nearly a two percent drop from the previous week.

"Queen of Reversals", starring Jung Joon-ho and Kim Nam-joo as husband and wife, is a drama that portrays the real-life situation in the workplace and marriage accompanied by suspicious romance and jealousy surrounding the couple.

The drama starring Moon Geun-young, Jang Keun-suk and Kim Jae-wook is about a girl who struggles to find true love amid the confusion of double contractual marriages she is forced to put up with.

"SBS series "Giant" takes No.1 spot for 9th week "
by HanCinema is licensed under a Creative Commons Attribution-Share Alike 3.0 Unported License.
Based on a work from this source