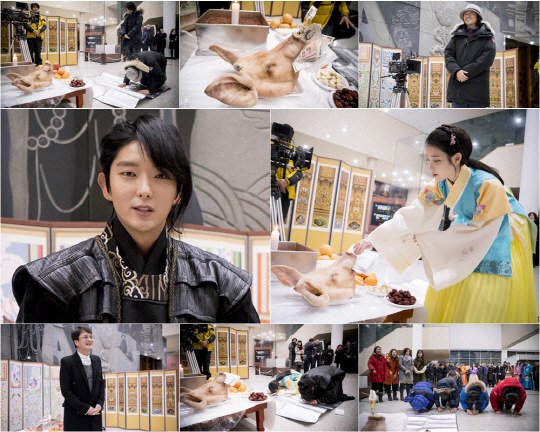 After a recital of a prayer wishing for the best of health of the staff and cast, everyone including staff on the filming team, the lighting team, martial arts team, and production team took turns giving their offer to the spirits.

Lee Joon-gi who takes on the role of Tae Jo's fourth prince Wang So, said, "I wish no one gets hurt in the process. As I am in the middle of the entire cast, I will make sure to get along well with everyone". IU, who plays Hae-soo, a 21st century girl who time slips to the Koryeo times, said, "I will do my best".

Jo Min-ki who takes on the role of Tae Jo, the king and father of four good looking sons, "I hope this drama cooperates with all my sons, seniors and juniors, directors, producers and staff. I just hope no one gets left out or hurt".

Stills show a pig head with the Korean Won, Japanese Yen, US Dollars and even British Pounds. The NBC Universal personnel were at the ritual and also wished the best for "Scarlet Heart: Ryeo".

""Scarlet Heart: Ryeo" Lee Joon-gi and IU's global ritual"
by HanCinema is licensed under a Creative Commons Attribution-Share Alike 3.0 Unported License.
Based on a work from this source