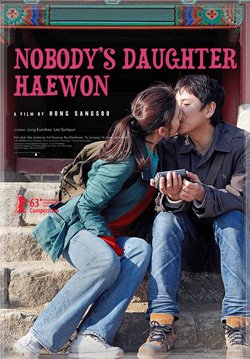 However, Hong may take some consolation from all the praise "Nobody's Daughter Haewon" attracted, with many critics describing it as a great ambassador for Korean cinema in general.

The movie, which was seen by an audience of 1,600 when it premiered at the Grand Hyatt Hotel in Berlin on Friday, portrays the ups and downs of a college girl after her mother leaves her to go and live in Canada. It will be released here on Feb. 28.

Hong was invited to the competition section of the same festival for the first time in 2008 with his movie "Night and Day". In 2011, Lee Yoon-ki's "Come Rain Come Shine" starring Hyun Bin and Lim Soo-jung, was also part of the line-up in Berlin.

"Second Time Unlucky for Hong Sang-soo at Berlin Film Festival"
by HanCinema is licensed under a Creative Commons Attribution-Share Alike 3.0 Unported License.
Based on a work from this source