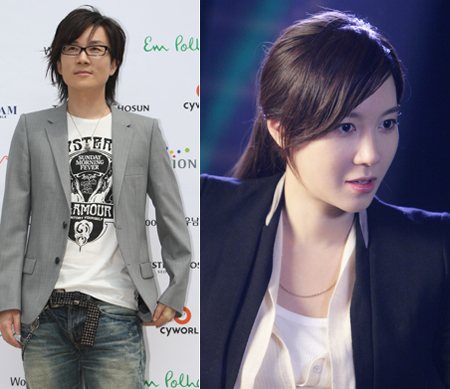 For the most, entertainers make us laugh with their talents. But they are often the scrutiny of the limelight themselves, prompting news, sometimes rumors and controversies.

Here are the top entertainment news items that made headlines in 2011.

I. Marriage and divorce of Seo and Lee

On April 21, Sports Seoul, a local newspaper, revealed that legendary singer Seo Taiji, 39, and actress Lee Ji-ah, 30, were once lawfully married and were filing for a divorce. Specifically, Lee had filed for alimony and division of property amounting to 5 billion won through a Korean law firm, Barun Law, earlier this year.

According legal sources, the couple got married in 1997 in the United States, shortly after Seo announced his retirement as a singer, disbanding the sensational music group Seo Taiji and the Boys. The couple had lived in Atlanta and Arizona.

The news quickly kicked off a controversy as both the singer and the actress had been thought to be single. Particularly, Lee had recently admitted dating actor Jung Woo-sung.

Lee dropped the alimony and division of property lawsuit on April 30. Seo released a statement on his official website on the same day explaining their relationship.

After a storm of rumors and news, Lee came back to the small screen for MBC drama "Me Too, Flower!" to play a police officer in November. 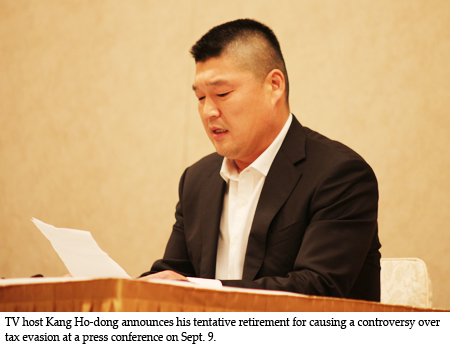 In August, Kang Ho-dong, 41, a popular show host and comedian, was accused of tax evasion. A businessman had informed the authorities that the former "ssireum", or Korean wrestling, champion hadn't been paying proper taxes.

Shortly thereafter, Kang announced tentative retirement from the media for having caused controversy. This was a great shock as Kang had been hosting top variety shows like "1 Night, 2 Days", "Golden Fish-Mureuppak Guru", and "Star King".

On Dec. 18, the Seoul Central District Prosecutor Office announced it would not investigate the alleged tax evasion. It said in order to pursue the case, the National Tax Service (NTS) must issue a complaint. Although the NTS had imposed back taxes and penalties, the agency concluded that it was a simple mistake by Kang's tax account, not an intentional evasion. Thus, the NTS decided not to refer the case to prosecution.

While much attention is directed towards Kang's plans on returning to show business, he has not commented on the matter publically.

Kang was not nominated for any year-end awards given by broadcasting agencies, but KBS unexpectedly awarded the entire crew of "1 Night, 2 Days" the KBS Entertainment Grand Prize on Saturday. This caused a stir as only singer-actor and Kang's co-host, Lee Seung-gi, was initially nominated.

In November, Rep. Kang Yong-seok filed a lawsuit against comedian Choi Hyo-jong for defaming lawmakers. On KBS's comedy show "Gag Concert", Choi made sarcastic comments about how easy it was to become a lawmaker.

About campaigning, Choi said "You go to traditional markets you've rarely visited before, shake hands with senior citizens, and eat soup with rice, which you don't usually eat, at a shabby restaurant". He continued "You can promise to build a bridge or open a subway station. Is it impossible to keep the promise? Don't worry, you don't need to keep it but just say you will".

Kang called Choi's remark a collective defamation of the country's lawmakers and sued him. However, after much criticism about Kang's overreaction from the public, especially as he was previously found guilty for collectively defaming television announcers with sexist remarks, he dropped the complaint against the comedian. 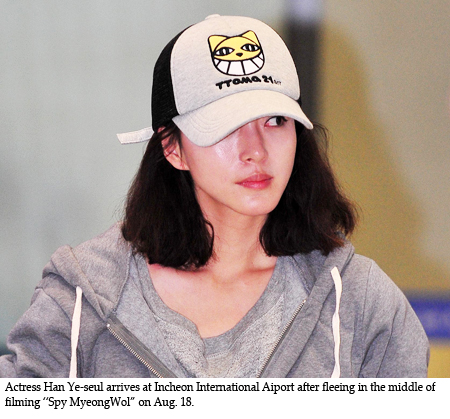 Actress Han Ye-seul, 30, fled the country in the middle of the filming of KBS drama "Spy MyeongWol" in August. She was playing the female lead, Han Myeong-wol, a North Korean squad member. Han reportedly complained about the unbearable working condition with last-minute scripts and demanding shooting schedules.

Initially, she did not show up for shooting on Aug. 14 after a heated conversation with the producer of the show, Hwang In-yeok, on the previous day. Then, on Aug.15, Han flew to Los Angeles where her parents live.

Her absence led to the cancellation of one episode and, instead, a special highlight of the drama was aired. It was the first time for a leading actor to abandon a drama shoot.

The production company of "Spy MyeongWol", Kim Lee Productions had expressed that it will take legal action against Han. "We've accepted her requests to change the script adding more scenes for her and altered the filming schedule to suit her and patiently put up with her frequent late arrivals on the set to continue the drama production", the statement said. "For the lead actress to abruptly stop working is an irresponsible act that breaks a promise made to viewers and ignores the staff and other actors who work hard despite difficulties", it said.

Han arrived at the Incheon International Airport on Aug.18 and told reporters that "I did not think things will improve unless I took this measure. I hope this serves as a reminder for people in the industry".

Han then returned to the drama and continued shooting "Spy MyeongWol". 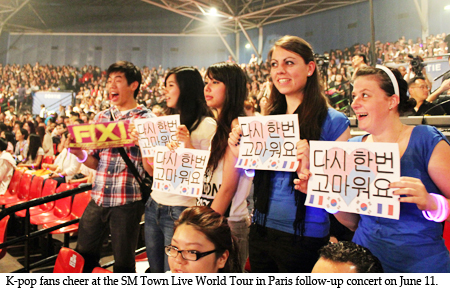 K-pop stars had a stellar year. The stars enjoyed success pioneering new markets in Europe and the Americas, marking their new status at the forefront of "hallyu", or the Korean culture wave.

In June, SM Entertainment artists, TVXQ, Girls' Generation, Super Junior, SHINee and f(x), held the first K-pop concert in Paris. The concert was so well-received that the artists went back for a follow-up show. In November, singers B2ST, 4Minute and G.NA held another concert in the United Kingdom.

K-pop's popularity at home is not as brilliant as it was overseas. The popularity of "I am a Singer", a talent competition featuring veteran singers, proved that the home audience has a preference for authenticity over the idol-dominated music scene.

Likewise, audition programs like "Superstar K", "Star Audition: The Great Birth" and "Survival Audition K-pop Star" attracted many viewers as they search for singers who can actually sing, and are not well-packaged performance dolls.

"Secret marriage, lawsuits, rumors: stars make headlines "
by HanCinema is licensed under a Creative Commons Attribution-Share Alike 3.0 Unported License.
Based on a work from this source