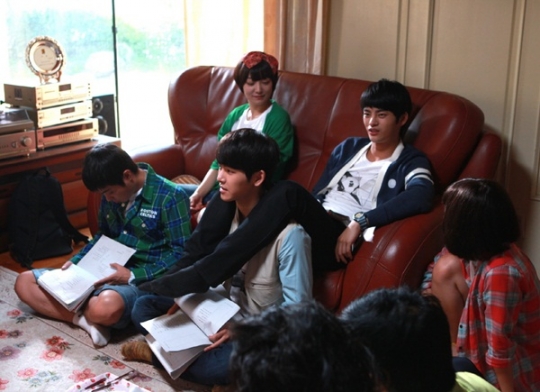 Singer Seo In-guk's feet were seen on the shoulders of Lee Ho-won of Infinite on the tvN "Answer Me 1997".

Coming on the 24th, "Answer Me 1997" is based in Busan in the 1990s when HOT and the Sechskies made it big. It is a retro drama about six boys and girls in high school including, the biggest HOT fan Si-won (Jung Eun-ji), Yoon-je (Seo In-guk), Hak-chan (Eun Ji-won), Joon-hee (Lee Ho-won) and others.

In the picture revealed, Seo In-guk's legs are around Lee Ho-won's shoulders. This was taken when the cast was getting ready for the next scene.

The two are getting closer to each other through this program and fooling around with each other. According to the staff on site, "From Eun Ji-won (1987) to Jung Eun-ji (1993), everyone is of the same age and they never stop jittering and chattering as if this was really their school".

"Seo In-guk's legs over Lee Ho-won's shoulders, friends"
by HanCinema is licensed under a Creative Commons Attribution-Share Alike 3.0 Unported License.
Based on a work from this source