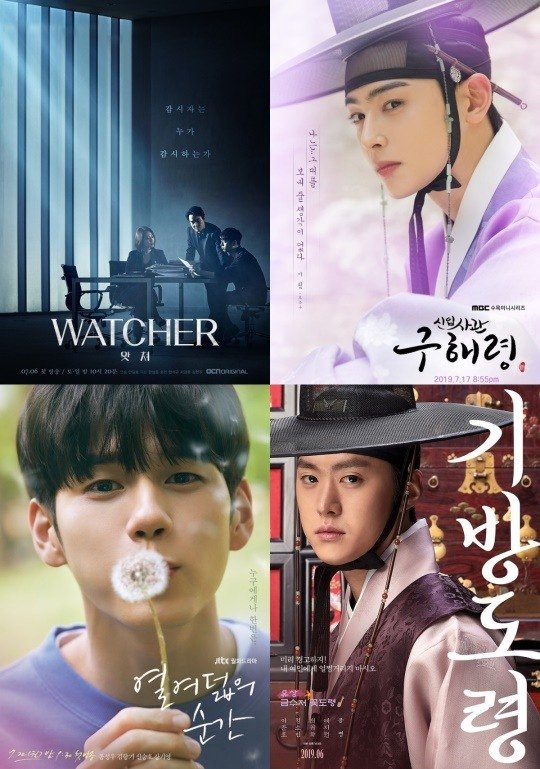 "WATCHER", the latest OCN original drama that's coming on the 6th of July, is a psychological thriller that delves into the reality of power. It follows the story of three men and women who join a special anti-corruption police investigation unit after their lives are shattered by a dramatic event. Seo Kang-joon takes on the role of Kim Yeong-goon, a policeman who witnesses a murder. Kim Yeong-goon is warmhearted and kind, but he acts cold and blunt purposely while he's in the police station. Due to a coincidence, he joins the anti-corruption police investigation unit after an acquaintance with Do Chi-kwang (Han Suk-kyu) and Han Tae-joo (Kim Hyun-joo), who are involved with a dramatic event.

Seo Kang-joon has attempted change in acting styles since his very debut and "WATCHER" is his first genre drama. He commented that he prepared for this role by watching documentaries and various resources, and he's apparently now completely engrossed in the character of Kim Yeong-goon. He performs everything from intense action to the deep psychological descriptions of the character's complex inner circle that lead him to join the corruption investigation team to find answers to the truth.

He played Do Kyeong-seok, a kind-hearted campus boy in the 2018 summer drama "My ID is Gangnam Beauty" and rose to stardom. Cha Eun-woo expressed that he'd like to properly depict Yi Rim who was born with a lonely fate and is unfamiliar with everything.

Ong Seong-wu debuted with the group Wanna One and has been seeking his own brand in various departments. He's coming out with the new jTBC drama "A Moment at Eighteen", an intriguing look at the world of inept youth. Ong Seong-wu plays Choi Joon-woo, an eighteen year-old teenager. It is the story of the growth of Choi Joon-woo, a boy who is poor at expressing emotions because loneliness was a daily thing, but who has the cutest charm.

Ong Seong-wu has taken on the stage everywhere in the world as part of the group Wanna One, but he seeks to start a new chapter with "A Moment at Eighteen". He's declared that it has been a long time dream of his, and not just a challenge, and his fans support his passion. Every time a teaser or a poster comes out, the public pays attention. Ong Seong-wu's new attempt at starting over as an actor is highly anticipated.

Gong Myung stars in the new jTBC drama "Be Melodramatic", a comedy by director Lee Byeong-heon-I and Kim Hye-young-I about the concerns, love and life of thirty year old women. Gong Myung plays Choo Jae-hoon, Hwang Han-joo's (Han Ji-eun) junior at work. He struggles through various situations with Han-joo, the marketing team leader, and starts developing feelings for her.

Gong Myung appeared in the Box Office hit movie "Extreme Job", which rounded up over 16 million views, as the youngest detective Jae-hoon and made an impression of himself. While he's cast himself for another one of Lee Byeong-heon-I's works, he's coming out with the movie "Homme Fatale" on the 10th of July first. "Homme Fatale" is a comedic film of a fusion-historical genre and Gong Myung plays Yoo Sang, a handsome scholar who has eyes for and only for Hae-won (Jung So-min).

This summer is lined up with school, youthful, sageuk and genre pieces with Ong Seong-wu on Monday / Tuesday, Cha Eun-woo on Wednesday / Thursday, Gong Myung on Friday / Saturday and Seo Kang-joon on Saturday / Sunday.

"Seo Kang-joon, Cha Eun-woo, Ong Seong-wu and Gong Myung Sally into July "
by HanCinema is licensed under a Creative Commons Attribution-Share Alike 3.0 Unported License.
Based on a work from this source