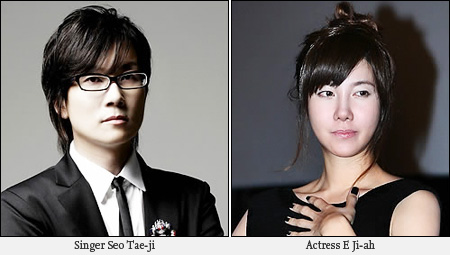 Singer Seo Taiji and actress Lee Ji-ah have settled the months-long dispute over their marriage status.

Key Leeast, the agency representing Lee, announced Friday that the two were now officially divorced and they settled the dispute through a court mediation at the Seoul Family Court.

According to a statement by Lee's agency ― released under permission from both sides ― they reached an agreement involving no monetary transaction.

"Seo and Lee have agreed to divorce without any monetary payment. Their marriage status had already been resolved before the lawsuit but the two had to go through the procedure once again to prevent any legal flaws that might cause another dispute in the future", the statement said.

The agreement came about six months after Lee filed a suit against Seo in January demanding alimony and division of assets under the premise that the two had divorced in 2009. Lee claimed that the filing period had not yet expired.

Seo, however, claimed that their marriage ended in 2006 through a ruling made in a U.S. court. Lee had claimed that the divorce was invalid because the ruling was made in the United States and therefore not effective in Korea.

Through the mediation, both sides agreed not to sue, slander, engage in monetary dealings, publish or release albums about their marriage.

Both sides also agreed not to sue each other in civil or criminal court in the future and if either one releases any publication dealing with their marriage, the violator would pay 200 million won as penalty for breach of contract.

Under the agreement, Lee now withdraws any and all charges against Seo, which Seo agreed to accept.

"Seo Taiji, Lee Ji-ah settle marriage dispute"
by HanCinema is licensed under a Creative Commons Attribution-Share Alike 3.0 Unported License.
Based on a work from this source