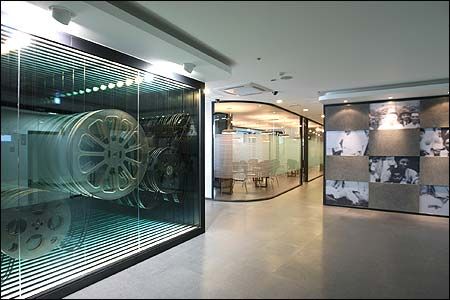 Seoul city will recruit a second group of 36 movie producers who will move in to the "Producer's Zone" at DMC Hi-Tech Industry Center in Sangam-dong, Mapo-gu. It was built to encourage original ideas for the improvement of Korean cinema.

Currently, first group of 40 producers are working in "Producer's Zone" and another 18 film directors in the "Director's Zone", both of which are designated the "filmmakers' creative area" by Seoul City.

Among the promising residents are producer Kim Young-min, who worked on "Happy Killers", recently released, Kim Sang-geun filming "The Invicible" to be screened in September, and Kim Bok-geun working on "Delighted? Delighted!" which is also to be released in the same month.

The newly recruited will reside in the zone for one year at a sweet deal- a minimum expense of 250,000 won a month, starting Nov. 1. The producers are provided with a personal working office, seminar rooms, business rooms, and public working space. Also, the center can financially support producers with opening classes, pitching new movie ideas, and shooting Seoul-based films. All this process can be more effectively done through communications between them and their neighbor directors.

Application are accepted through Sept. 17 and there is No Limit on applicants. Application and related documents can be mailed or submitted to office in person. Those who are planning films with an effect of space-marketing of Seoul will be preferred.

Further information and applications are available at (Open the link). The office is located on 2nd floor of Insung Building, Chungmuro 2-ga, Jung-gu, Seoul. Results will be notified on Oct. 14 but could be delayed due to certain circumstances.

"Seoul recruits 36 new film producers"
by HanCinema is licensed under a Creative Commons Attribution-Share Alike 3.0 Unported License.
Based on a work from this source