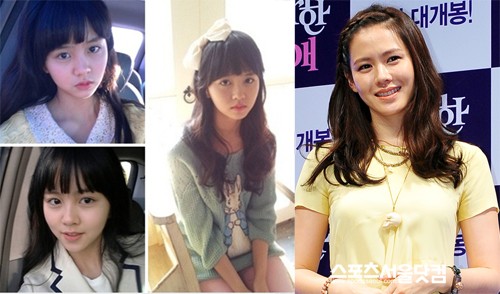 Several pictures of Kim So-hyun in her daily life have been revealed on various online community sites. She is so bright and innocent in the pictures.

Netizen's have been spreading her pictures all over blogs and online community sites. They are praising her endlessly of her beauty and comparing her to actress Son Ye-jin.

As her name kept coming up in various portal sites, she posted on her Twitter, "I have not thought of myself looking exactly like Son Ye-jin but I would like to resemble your talents which can't even keep up with your beauty".

Those who have seen this made a big fuss once again and say, "She's so pretty on the inside too", "She is so kind although she plays the bad one all the time", "She was pushed away by Kim Yoo-jung in "The Sun and the Moon" but she will becoming more popular in the future" and more.

""She looks like Son Ye-jin" Kim So-hyun"
by HanCinema is licensed under a Creative Commons Attribution-Share Alike 3.0 Unported License.
Based on a work from this source