"She Was Pretty" Hwang Jung-eum struggles with Kim Ha-kyoon 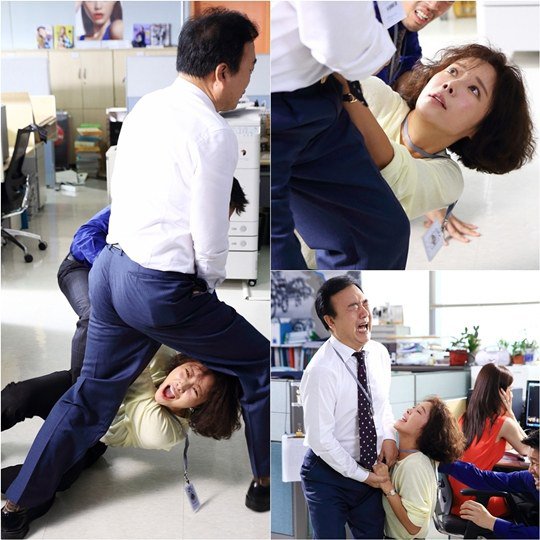 Hwang Jung-eum had an episode with Kim Ha-kyoon on her first day of work.

Stills of Hwang Jung-eum from the new MBC drama "She Was Pretty" were released online on the 9th.

Hwang Jung-eum is at her first day of work; she holds onto Kim Ha-kyoon's pants and won't let go. She's stuck to his leg like glue.

This scene was taken in early August. She's in a funny outfit with white socks all the way up to her ankles and black flats.

Apparently Hwang Jung-eum fell 7 times on her behind during the making of this scene.

"She Was Pretty" is a romantic comedy about Hye-jin, Sung Joon, a handsome guy, Ha-ri, a perfect and sexy woman, and Sin Hyeok who is a secretive man.

""She Was Pretty" Hwang Jung-eum struggles with Kim Ha-kyoon"
by HanCinema is licensed under a Creative Commons Attribution-Share Alike 3.0 Unported License.
Based on a work from this source