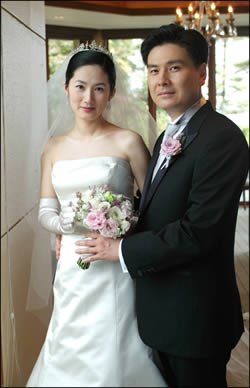 Shim Eun-ha, one of the top actresses of the 1990s, poses with her new husband Chi Sang-wook in a wedding photo released to the public Tuesday. The couple wed at a private ceremony attended by about 150 people at Sheraton Grande Walkerhill Hotel in Seoul yesterday. Shim, 33, starred in the hit film "Christmas in August" in 1998 and the television drama "Trap of Youth" in 1999. Chi, 40, is a research professor at the Graduate School of International Studies of Yonsei University and the only son of the president of Hansung Industrial. Yonhap

"Shim Eun-ha Marries"
by HanCinema is licensed under a Creative Commons Attribution-Share Alike 3.0 Unported License.
Based on a work from this source