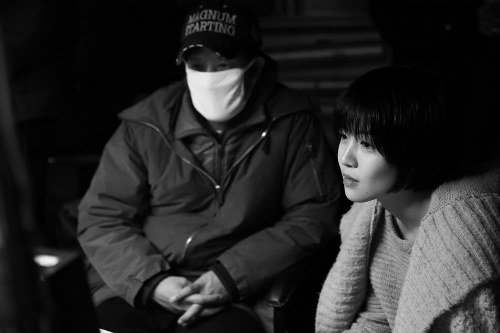 "Missing You - 2016" starring Shim Eun-kyung and Kim Sung-oh is now in the final stages of preparation.

According to distributor NEW, the movie took 3 months to film until the 29th.

"Missing You - 2016" is about a girl who loses her father to a serial killer and a detective who takes care of her. The serial killer who comes out into the world gets complicatedly involved with her.

This is Shim Eun-kyung's first thriller in the role of Hee-joo, the girl who waits 15 years to find out the true killer who killed her father.

Shim Eun-kyung said, "I wanted the role so badly the moment I laid eyes on the script. I fell for the character so much in the last 3 months that I don't think I'll be able to send her away just yet".

Kim Sung-oh takes on the role of the serial killer who waited 15 years to be released and he is as bad as he can get. Kim went through massive weight loss for this role.

Kim Sung-oh said, "Everyone came all this way with "Missing You - 2016" so we could all become one. We strongly felt like we were making the movie together".

Yoon Je-moon plays detective Dae-yeong who took care fo Hee-joo and waited for the serial killer. In the many scenes that required endless running, Yoon Je-moon was the professional that he is.

Yoon said, "I feel good and sad at the same time when a movie wraps up. This one was physically challenging but it's going to be a memorable one".

"Shim Eun-kyung's first thriller "Missing You - 2016""
by HanCinema is licensed under a Creative Commons Attribution-Share Alike 3.0 Unported License.
Based on a work from this source