"Kairos" is a fantasy thriller drama about a man who is in shock after the kidnapping of his young daughter and a woman who lives a month in the past, crossing through time, struggling to save the ones they love. 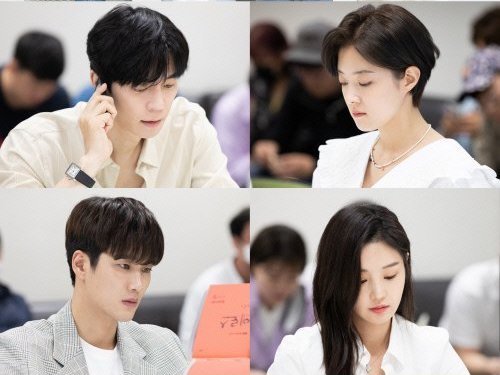 Prior to the script reading, director Park Seung-woo said, "I think the people make up 90% of a production. I feel very good starting this drama with good people". Writer Lee Soo-hyeon-I said, "It's an honor to be working with irreplaceable actors. I will do my best".

Shin Sung-rok in the role of Kim Seo-jin, said, "I really enjoyed the script. Thank you for the opportunity". Lee Se-young in the role of Han Ae-ri said, "I feel nervous but I will do my best".

"Shin Sung-rok, Lee Se-young, Ahn Bo-hyun and Nam Gyu-ri at the Script Reading for "Kairos""
by HanCinema is licensed under a Creative Commons Attribution-Share Alike 3.0 Unported License.
Based on a work from this source