Should We Let Lee Hyori Off the Hook? 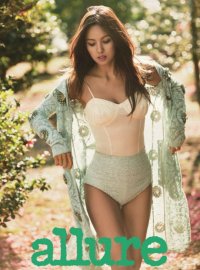 Can pop stars be forgiven practically any offense? That is a question on many lips after the revelation that singer Lee Hyori's latest album "h.logic" contains no fewer than six plagiarized songs. Lee admitted to the wrongdoing and vowed to refrain from promoting the album. Yet she appeared on a recent SBS program.

The producers say Lee was not directly responsible for the plagiarism, but the public sees things differently. They feel it is unseemly for Lee to make out that she is a victim herself, and that the producers of TV shows should not sweep the problem under the carpet.

Unlike other artists accused of plagiarism, who deny their wrongdoings to the end, Lee owned up. But the fact that half of an artist's album consisted of songs that had been stolen from foreign artists leaves an indelible stain on Korean pop music as a whole. Lee in a statement issued by her management agency Mnet Media said she had "no reason to be suspicious" since she was given the songs by the agency. She claims her rookie songwriter, a person by the name of Bahnus, lied to her.

It was after all not the first time that Lee has been accused of plagiarism. And given that she had been promoting herself as a consummate professional while producing her latest album, these comments seem rather pathetic. In an earlier interview she claimed the album contains songs that were strictly screened from 1,000 songs submitted by a wide range of composers. "We even checked to see if any of those songs were similar to other tunes out there using the iPhone application 'SoundHound'." The comments have lost all credibility.

Accusations of plagiarism surfaced on the Internet shortly after the album was released in mid-April, but she continued to market the songs until the end of May on various TV and radio programs. Bahnus had apparently left Mnet Media on May 10 "taking all responsibility" for the accusations of plagiarism. That means Lee and Mnet Media had about 40 days to recognize the suspicions, making it difficult for Lee and Mnet Media to escape criticism that they fooled the public.

The larger problem is how frequent such are. Many if not most singers releasing new albums these days are accused of plagiarism. This is because singers have become cash cows rather than artists who are able to communicate with the public. Singers who present original songs about their own emotions are an endangered species, while a handful of composers contracted by powerful management companies dominate the tunes that top the charts. This increases the risk of plagiarism as each one of these composing machines churns out more than 50 songs a year.

Lee's biggest mistake was in fact her failure to take charge of her songs and her album, contrary to what she has been saying in public. If a 13-year veteran of the entertainment industry and Korea's reigning queen of pop is in such bad shape, things must be even worse for the younger singers who are being groomed by their agencies. Veteran rock guitarist and singer-songwriter Shin Jung-hyun said in a recent interview, "There is no real music on Korea's pop music scene these days. There is only greed". Gone are the days when singers made their own music and conquered the stage with powerful voices and honest pride.

By Choi Seung-hyun from the Chosun Ilbo's News Desk