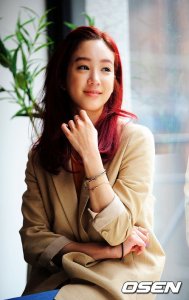 Jung Ryeo-won was not an "It girl" when she was a singer in the group Chakra  a Korean all-girl band. When she turned her career path to acting, she didn't draw much attention at first, and it was common at the time for many singer-turned-actors, many far more famous and popular than her, to become the target of harsh criticism for their low-grade acting. But with the success of "Hello, Francesca", a situation comedy, "My Name is Kim Sam-soon", a drama, and "What's Your Star ??", another drama, she made a soft-landing as an actress.

Now, she has made her debut as a movie actor. In her first movie, "'2 Faces of My Girlfriend', soon to be released on September 13, she appears as a person with an identity disorder. In the movie, she plays a naïve and dreamy girl named "Ani", but suddenly turns into the violent "Hani". Actor Bong Tae-gyu played her shy but generous boyfriend. The movie is reminiscent of "My Sassy Girl" to an extent, but it has a cartoon-like fun factor and it is enjoyable to watch the two extreme personalities played by Jeong. Jeong said, "I like acting so much that my heart beats fast". She seemed like a nerve-wrecked student waiting for the result of an exam.

Q. This is your first leading role. You must be nervous.

A. At first, I turned down the role. It seemed to involve enormous burdens. But I thought that without taking on such a challenge at this point, I couldn't grow further as an actress. Buying a house while being overstretched eventually turns out to be a better choice than renting a house.

Q. You said at the movie premier, it had been your dream to stand before an audience at a premier.

A. I always thought, 'when can I do that?' I go to Megabox at Coex to watch a movie three times a week. And I stand before movie fans at this theater! Two days ago I came here alone to watch 'Ratatouille'.

Q. The fighting and swearing character strangely suited you.

A. I am not a violent girl like Hani, but nor am I a girly-girl. I was struck when people were surprised at my acting skill. I realized that people thought of me as a frail girl who always needed protection. I am like a strong Sunflower, not a fragile flower.

Q. Were you at all confused while playing two completely different personalities?

A. I had to change my personality with a blink of an eye. But when you put your mind to something, you find out just what you are capable of.

Q. In your movie, there is a line that reads: "If God exists, he should guarantee a recall, when his creature is flawed". Do you want any part of you recalled?

A. I suffered an inferiority complex. I thought I was always unhappy in the past but not anymore. I read from a book that people are happy when they are content with what they have. (lifts a cup) If you are born as a cup like this and there is no point of being jealous of a bigger cup.

When I said, "You're right, but it isn't easy", she responded, "You can brainwash your own brain. You can". She seemed a stronger person than I expected. She said when she had returned to Korea after 9 years living in Australia, she didn't want to speak with awkward pronunciation like those who spent long years overseas so that she practiced Korean pronunciation from a book all day.

Q. Part of your impressive image is the fact that you are a fashionista. You don't look so dressed up. Your not-too-overt but chic layered look is absolutely fabulous.

A. You think jeans and T-shirks look cool enough? That's a lie. You don't look so fabulous wearing just plain jeans and a shirt. You have to wear jeans and shirt that fit you well. To that end, you should know your size and shape. If you have narrow shoulders, you choose a loose-fit shirt. You can create your own style when you know yourself well. I have lots of ideas about fashion. Sometimes I go to the whole sale market to buy materials and I make my own accessories.

Q. I saw you gorging Korean pork barbeque in the movie. And here you are eating ice-cream.

A. I gain weight easily so I have to work out hard. I jump rope 1,000 times and walk 10 km every day. I exercised during the movie shooting too. I think fame requires responsibility. When celebrities are asked a secret of flawless skin, they answer with the same old lie. Please; They get facials!