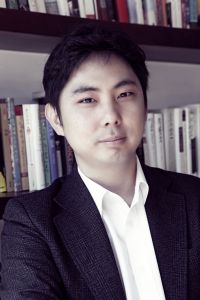 The nickname "Little Kim Ki-duk" after one of Korea's most celebrated filmmakers tails director Jeon Jae-hong -- especially now that his feature debut piece "Beautiful", based on an original story by Kim, won him a ticket to Berlin. But the nickname doesn't seem to bother the 30-year-old, who fearlessly jumped into the movie industry only three years ago.

"I like being called `Kim Ki-duk Two"', he told The Korea Times last week before leaving for the 58th Berlin International Film Festival (Berlinale), which runs through Sunday. "Beautiful", which was also produced by Kim, is being shown in the out of competition section, Panorama.

Born in Seoul, Jeon started receiving vocal lessons in the third grade. He moved to the United States at the age of 15 and after graduating from an art school in New York, continued studying the art of singing in Vienna. But upon graduation, he would attend an American business school there instead. So why now a filmmaker?

The singer-turned-business major-turned-director says it was all a part of preparing himself for his ultimate dream, cinema.

"I pursued the path of an opera singer for more than 20 years. I had completed my studies, but felt that classical music limited my expression. I also studied drawing as well, and I felt that cinema was the perfect way to express all these things together.

"I finally decided to do what I really wanted to do", he said.

Afterward, he moved to New York, paid $200 for a handheld camera and started shooting short films. That was three years ago. He soon had over a dozen short films under his belt, among which "Color" competed at the 2005 New York International Independent Film & Video Festival.

"I had no fear. I had no knowledge about movies, which was what actually enabled me to do it", he said. Plus, being in Manhattan was a great advantage because there are so many venues to shoot and getting permits is relatively easy.

He finally met Kim by chance in Cannes, and told him how he wanted to learn filmmaking. He thought it would be the best way to learn, better than attending a film school.

"He was so kind and said, why don't you come back to Korea, and I did", he said. He went back to New York, packed his bag in eight hours and headed to Seoul. It was his first time in 14 years.

Jeon worked on Kim's crew team for "Time" (2006). He then made a name for himself when his short film "Fish" was invited to compete at Venice last year. It was during the post-production process of "Fish" that Kim handed him the synopsis for "Beautiful". He was given two months to write up the script, or else "leave quietly for New York", he said with a laugh.

And so he fearlessly explored the story. "Beautiful" is about how a young woman ends up being doomed by her own beauty. "It's a fairytale that's deeply rooted in reality", he said. Like Snow White or Sleeping Beauty, the protagonist is plagued with stalkers. One of them rapes her.

Now, a few months later -- and an amazingly short shooting schedule, completing the film with just a dozen or so shoots -- he is heading to one of the biggest film festivals.

"Had I jumped into the film industry earlier, I don't think I would have arrived where I am now. I think the many years of waiting prepared me and intensified my drive", he said. Singing for example, helps him overcome his inhibitions. He learned to overcome his fears when hitting high notes, and does the same for movies.

"But with feature films, you must think of the results. You have a bigger budget and a whole team that depends on you. However, as always, I must isolate myself from my fear", he said.

"It's different from being confident. Having no fear is being true to yourself and believing in yourself", he said.

"I've read some critics say (after watching `Beautiful') that I am a copy of Kim Ki-duk", he said. "`Beautiful' is an original story by Kim, and I wanted to respect that. But right now I really don't care. I'm still young and have much to learn".

Other than Kim Ki-duk, Jeon said he admires versatile filmmakers like Ang Lee and Jean-Pierre Jeunet, and hopes to pursue a colorful array of movie genres and styles. In his next work "Doll", unlike "Beautiful", he will focus on the visuals, like color and form.

"I'd like to take one step at a time. When `Color' was invited to New York, I wanted to compete the next time and I did with `Fish' at Venice last year. I'm ecstatic that `Beautiful' was invited to Berlin this time", he said.

"Filmmaking is like chocolate", he said. "You get a taste of it and keep craving for more. You never stop thinking about it".

Perhaps his next step may be to enter into the competition round. He smiled. Korean -- and world -- cinema have much to expect from this newcomer as he continues his fearless cinematic endeavors.

"Beautiful" will open across theaters in Korea Thursday.