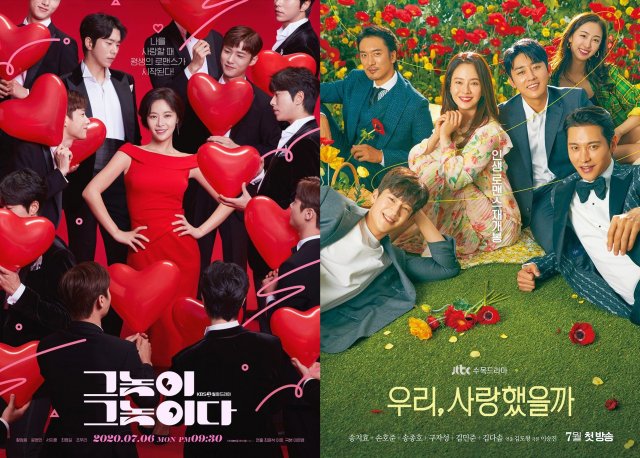 5 new dramas are beginning throughout the week. Viewers will get to experience the joy of 'choosing' dramas to watch this July.

KBS 2TV drama "To All The Guys Who Loved Me" which begins on the 6th at 9:30PM, is a romantic comedy drama about 'being single' that takes place when a webtoon planning team manager named Seo Hyeon-joo (Hwang Jung-eum) who became a non-marriageist because 'they're all the same', gets asked out by pharmaceutical company CEO Hwang Ji-woo (Yoon Hyun-min) and star webtoon writer Park Do-gyeom (Seo Ji-hoon), two men of conflicting charms one day. It is expected that the process of thinking about the meaning of non-marriage and the value of love will be solved with a light romantic comedy. In addition to the present, various stories will be presented from during the Joseon Dynasty, the 1930s and the 1970s. It is worth looking forward to as Hwang Jung-eum comes back right after starring in the recently ended drama "Mystic Pop-Up Bar".

"Was It Love" which begins on the 8th at 9:30PM on JTBC, is about a single mother who is courted by four men. Actress Song Ji-hyo plays No Ae-jeong, a single mom of 14 years who has been receiving affection from 'bad but charming' Oh Dae-oh (Son Ho-jun), 'cheerful and handsome' Ryoo Jin (Song Jong-ho), 'young and exciting' Oh Yeon-woo (Koo Ja-sung), and 'scary and sexy' Goo Pa-do (Kim Min-joon). Song Ji-hyo returns for the first time in 2 years since "Lovely Horribly".

Mystery, suspense and genre that will kick away the heat of the summer

JTBC drama "The Good Detective" which begins on the 6th at 9:30PM is an investigation drama that tracks the truth of the case in which two detectives of different personalities track down a truth that has been concealed. It stars Son Hyun-joo and Jang Seung-jo.

JTBC's second newest, "Graceful Friends" which begins on the 10th, is a mystery drama about the sudden death of a friend reveals the secrets that have been hidden since two decades of friendship. Attention is focused on whether JTBC, which has been loved by viewers for its luxury suspense dramas through "SKY Castle" and "The World of the Married" will make another leap forward. The drama stars Yu Jun-sang, Song Yoon-ah, Bae Soo-bin, Kim Sung-oh, Jung Suk-yong, Kim Won-hae and more.

There is also a genre that will blow away the summer heat. The OCN weekend drama "Train" (written by Park Ga-yun and directed by Ryoo Seung-jin-I), which will premiere at 10:30PM, is a mystery drama about a detective (Yoon Si-yoon) who intervenes in a series of murders to protect precious people in the two worlds divided by a momentary choice. The mysterious events that will take place across the two worlds are expected to turn the small screen into tension on a summer night. In addition to Yoon Si-yoon, Kyung Soo-jin, Shin So-yul, Lee Hang-na and Nam Moon-chul will appear in the drama.