SISTAR: Unpredictable girls ready to grow up but no too fast 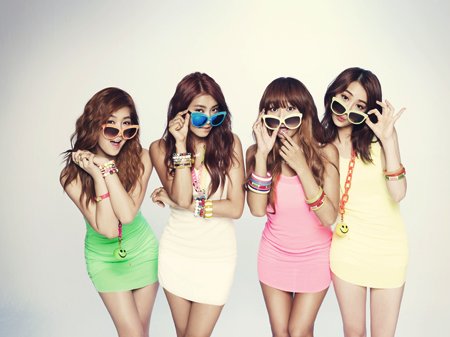 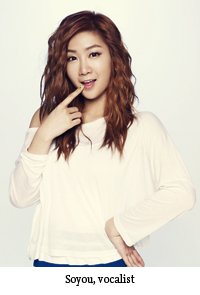 As the girls of SISTAR settled down in the sofas of their dressing room backstage at SBS's weekly K-pop show Sunday, it was striking how comfortable they looked, despite the presence of a reporter they had never met before.

First to find her spot, Soyou, 20, asked for her poofy Rilakkuma pillow and kept the Japanese bear character in her arms.

"It was a gift from a fan", she said. "I carry it around with me everywhere I go".

Yoon Bora, the eldest at age 22, sat down to her left, impeccably dressed and with flawless make-up on, while the 19-year-old Kim Dasom, the 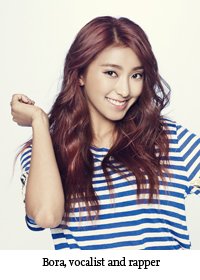 youngest of the four, rushed back from a break and found a seat on Soyou's opposite side, eyes sparkling. Hyolyn, 21, the vocal powerhouse of the group, was sitting quietly in front of a mirror as stylists frantically brushed the locks of her hair.

They were stars with a string of No. 1 hits in their discography, but nothing about their easygoing and cheerful demeanor seemed to suggest any diva attitude.

"Are we popular abroad?" said Yoon Bora and Soyou in unison, when asked about their place in hallyu, or the Korean wave.

The girl group is close to wrapping up their weekly TV appearance to promote the latest single "Loving U" and now preparing day in and day out for their first-ever concert in September. The single was released against the offerings by better 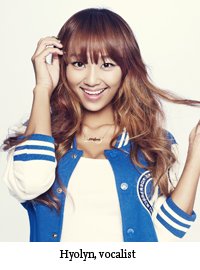 established names like 2NE1, T-ara, BoA and After School but surprised even the singers themselves by topping the sales chart last month.

Their previous single Alone had been an even bigger hit, its success also due to the moves and outfits that were sexier than usual. "Loving U" was a return to the vibrant, 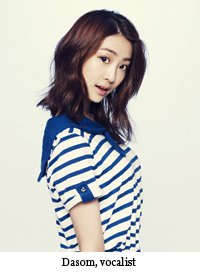 "People who didn't know us before that (during their promotion of Alone) thought we were much, much older than we actually are!" said Soyou, giggling but displeased. "Not just a year or two, but more".

They were not ready to grow up earlier than the girls of their age group, they collectively said. What would you like to do now, instead, if given a vacation? They dreamed of escaping to a remote location - "I would love to sleep all day", said Yoon Bora - or to Las Vegas, where they recently visited to shoot a music video.

What about love? "I want to date someone who is quite a bit older, a gentleman who is warmhearted, who can make me laugh without stopping, who I can learn a lot from", said Kim Dasom, breaking her long-held silence.

Hyolyn said she preferred a "real man", a big guy who can protect her when needed.

But there is no time, they said, sighing individually, especially because of their upcoming concert debut on Sept. 15 at the Olympic Hall in Bangi-dong, southeastern Seoul.

"All I listen to nowadays are our songs, you know", said Yoon Bora.

Hyolyn said people will be able to discover a whole new side - or multiple sides - of SISTAR, what they have not seen before.

"I don't want to spoil it too much, but it won't be the powerful, sexy, energetic SISTAR you expect from our TV performances. I hope a lot of people can come and enjoy our music", she said.

Korean pop girl group SISTAR are known for hits such as "Push", Alone and "So Cool". The four-member group were formed by Starship Entertainment in 2010. Its members are Soyou, 20, Yoon Bora, 22, Kim Dasom, 19 and Hyolyn, 21.

They made a successful debut in June 2010 with the single "Push Push". Their most recent summer video for "Loving U", released in June, attracted much public and media attention for the provocative outfits they wore; a marine and beach look that seem appropriate for the summer holiday season.

Their new E.P. is comprised of seven tracks, five of which are remix version of songs including their hits. The idol group has also performed overseas. SISTAR was chosen as one of eight groups including 2PM and Girls' Generation to perform at KBS2's "Music Bank" held in Paris in February this year. They were also invited to perform in Thailand's K-pop concert hosted by MBC last year.

"SISTAR: Unpredictable girls ready to grow up but no too fast"
by HanCinema is licensed under a Creative Commons Attribution-Share Alike 3.0 Unported License.
Based on a work from this source