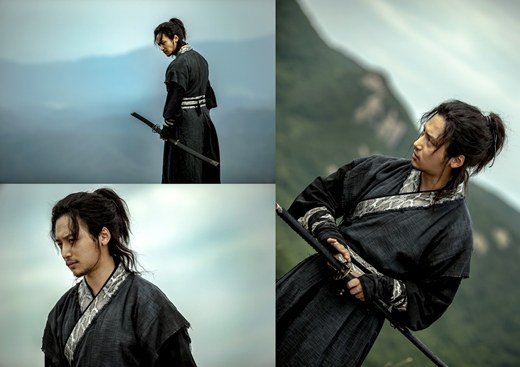 "Six Flying Dragons" is slowly unveiling. The first teaser shows a peak at the incredible scale and footage of the drama and increases anticipation.

Lee Bang-ji, one of the six dragons played by Byun Yo-han is standing alone at a cliff which looks intense. He's dressed like a warrior with a large sword in his hand. His hair is tied back into one and his face is covered with small scars and hair.

Byun Yo-han's role of Lee Bang-ji is a protective warrior for Jeong Do-jeon (Kim Myung-min) who is Boon-yi's (Shin Se-kyung) brother. Bang-ji gets involved with the history of Joseon and the picture of his face shows his sadness.

This picture was taken at Hapcheon one day in August.

Meanwhile, "Six Flying Dragons" is a fiction historical about the success story of six characters full of passion and success.

""Six Flying Dragons" Byun Yo-han"
by HanCinema is licensed under a Creative Commons Attribution-Share Alike 3.0 Unported License.
Based on a work from this source