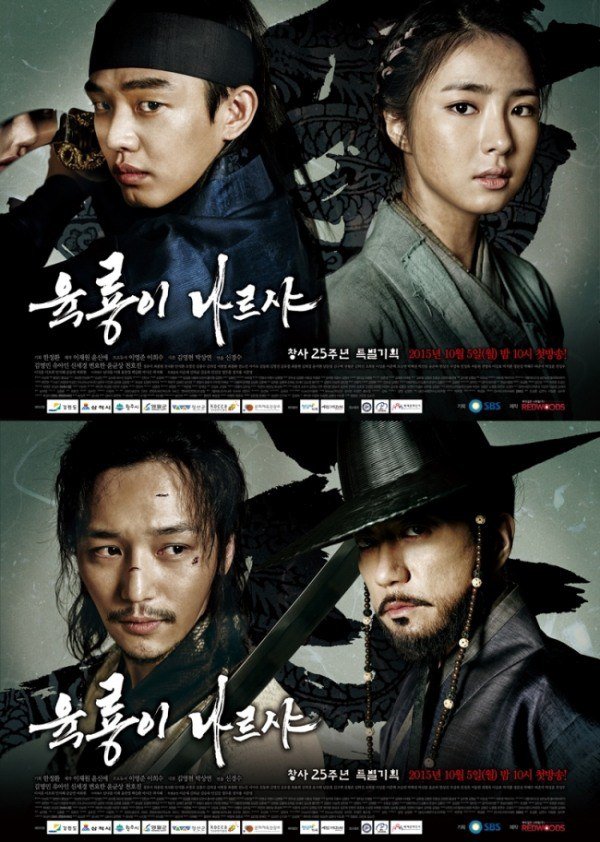 The third poster for "Six Flying Dragons" is out.

- Steel leader Lee Bang-won and passionate subject Bun-yo = The first poster of Yoo Ah-in and Shin Se-kyung shows them holding swords. Yoo Ah-in's eyes are strong and fierce as he becomes one of the 3 Great Kings of Joseon.

Shin Se-kyung comes off strong as well. Bun-yi is a tough and smart character. She gets stronger as time goes by and she represents the rest of the subjects.

- Rare and unique genius Jeong Do-jeon and his trusty warrior Lee Bang-ji. Jeong Do-jeon is looking at the camera with his sharp eyes. His face is mostly covered by a shadow but the uniqueness of this character still stands out.

Lee Bang-ji is the warrior of the wind. His tough life can be reflected from the scars on his face.

"Six Flying Dragons" is a fiction historical drama about six characters' success in the Joseon times. The first episode is coming on the 5th of October.

""Six Flying Dragons" Yoo Ah-in and Shin Se-kyung VS Kim Myung-min and Byun Yo-han"
by HanCinema is licensed under a Creative Commons Attribution-Share Alike 3.0 Unported License.
Based on a work from this source