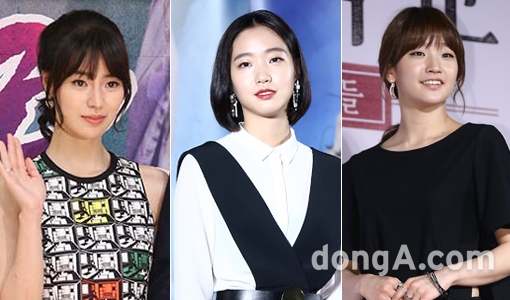 With their solid acting talents and star qualities, Lim Ji-yeon (25), Kim Go-eun (24), and Park So-dam (24) are on center stage. These actresses, who all studied at Korea National University of Arts' acting department, have built their careers up starting in silver screen before moving on to the small screen. They are very promising actresses in their 20s.

Lim Ji-yeon has successfully cemented her position in the living room with the SBS Monday-Tuesday drama "High Society" which ended its run on the 28th. She started out in the movie "Obsessed" and was looked upon with concern by some because of her risqué scenes in the movie. However, as the proud "Candy' character, she captured the hearts of female audiences. Starting on August 2nd, she will be showing off her other talents by hosting MBC's "Section TV".

Park So-dam who has been seen recently in the movie "The Silenced" is also making her small screen debut. She will be appearing on KBS2's "Drama Special - Red Moon" which will be broadcasted on August 7th. She will be playing Princess Hwa-wan in the story which adds imagination to the classic tale of prince Sado. The recent casting news of her in the role had been the top trending news for a moment.

Kim Go-eun who made a splash debut with the movie "A Muse" in 2012 will be starring in tvN's "Cheese in the Trap" airing this October. There were a lot of chitchat on the internet about her casting but her previous displays of her acting talent silenced all the doubters. Following the movie "Coin Locker Girl" early in the year, she will also be showing off her talents in "Memories of the Sword" opening this August.

All three actresses are currently or are alumni of Korea National University of Arts' acting department. Lim Ji-yeon was accept in 2009 while both Kim Go-eun and Park So-dam were accepted the following year. These actresses who studied at a renowned institution are thought to have the background to handle various characters. Their future activities are highly anticipated.

""Small screen hopefuls" Lim Ji-yeon, Kim Go-eun, and Park So-dam take over the living room"
by HanCinema is licensed under a Creative Commons Attribution-Share Alike 3.0 Unported License.
Based on a work from this source