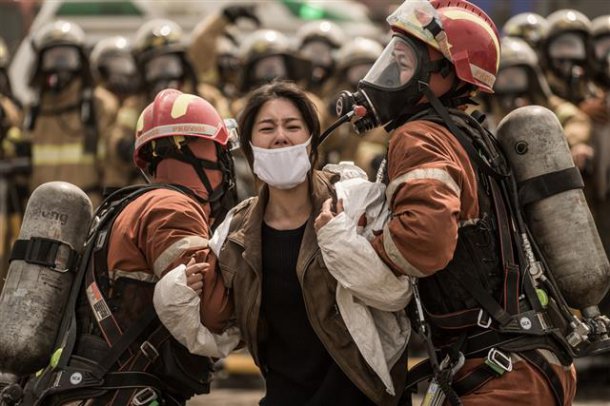 What will the audience think when the ending credits roll in the disaster blockbuster "Pandora", which is the first movie in Korea to tell a story about a nuclear accident? "Pandora" which opens on December 7 is a production that conveys the message of exposing the truth, leaving the fun out of cinema. The disaster portrayed in the movie is so heavy, vivid, and it surpasses the audience beyond imagination.

The plot is simple. There is an unprecedented magnitude 6.1 earthquake on the Korean peninsula. There is a problem with the cooling water leaking from the 1st generation of the aged nuclear power plant of the Yeongnam region. From the Blue House to the employees of nuclear power plant subcontractors, large and small talents overlap one by one, and Hanheung Unit 1 eventually explodes, causing radioactivity leakage on a large scale. The government is expected to protect the lives of the people and secure their safety, and show urgency to help minimize the situation. Residents in the area near the nuclear power plant are in chaos, and the lives of doomed family, neighbors and colleagues are saved by minorities, not the government.

The nuclear disaster situation in the movie is frightening. The crew worked with state-of-the-art computer graphics technology (CG) in 1300 cuts out of a total of 2,400 cuts to create an overwhelming scale of disaster and huge, complex nuclear facilities. Apart from the movie, exaggerated and unusual settings are occasionally noticeable. When the president asks for rescue plans, the Minister boldly claims there can be no such scenario. But even in the worst case situation, the nuclear power mafia strikes the abacus to avoid the loss of nuclear reactor disposal and power runs away to save their own lives while the lives of the citizens are locked up in a gym.

These scenes are a reality that our society has been through. The film was plotted way before the Sewol Tragedy and Choi Soon-sil, but the incompetence of the government in the film is very similar to the situation of the past. Some scenes were just taken out entirely to prevent unnecessary misunderstanding.

The humor and wit which are often sprinkled in disaster movies, have no place in "Pandora". From the explosion scene, the audience can hardly breathe. The actors who are in the situation of unprecedented situations perform their best and there is a feeling of intensity. Some of the scenes in the first half are overtaxing movie fun. It is inevitable in a commercial film to head for new light towards the end of the movie, but that's just disappointing. Park Jeong-woo, the director of the film, said, "The conclusion I dared to prepare for the film, is that the nuclear power plant is not 100% perfect, and that it is virtually impossible to prepare for an accident like this. I hope this movie makes the world a better place to live in".

"Sneak peak at nuclear disaster movie "Pandora" "
by HanCinema is licensed under a Creative Commons Attribution-Share Alike 3.0 Unported License.
Based on a work from this source