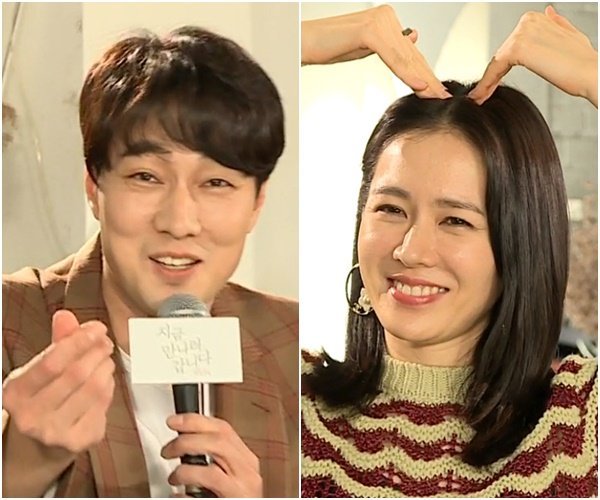 Actor and hip hop artist So Ji-sub and actress Son Ye-jin are a honey sweet couple in "Be with You".

Naver Special V App aired Movie Talk Live for the film on the 27th. Based on a Japanese movie, it begins with Soo-ah (Son Ye-jin), who was supposed to have died a year ago, appearing in front of Woo-jin (Seo Ji-sub).

The star actor pairing draws a great deal of attention, especially because it's their first movie together. They starred in a 2001 drama as brother and sister but this time they're a married couple.

So Ji-sub said, "I'm clumsy and not as funny as Woo-jin. I don't talk much either, but I'm very much like Woo-jin. It made be comfortable acting him". He claims he felt tingles when he first held Son Ye-jin's hand.

Director Lee Jang-hoon also said, "I went to So Ji-sub's fan meeting and saw him dancing to hip hop. He applies himself on the character and not the character on him".

Son Ye-jin appeared on the MBC TV show "Infinity Challenge" in 2014. Lee Jang-hoon chose her for her bright and boldness.

Just seeing the two of them was enough to increase anticipation for the movie "Be with You" this spring which comes out on the 14th of March which is White Day.

"So Ji-sub Felt Tingles Holding Son Ye-jin's Hand in "Be with You""
by HanCinema is licensed under a Creative Commons Attribution-Share Alike 3.0 Unported License.
Based on a work from this source