SO Ji-sub on the silver screen 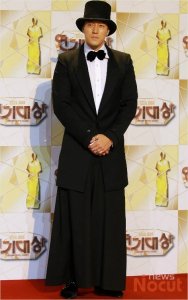 SO is known as a charismatic on-screen presence. He effortlessly takes the leap from the small screen to dominate the big screen.

SO plays a troubled hard-boiled gangster with a love for cinema. He is a fan of KANG's character, a star actor who specialises in violent gangster roles. While KANG also behaves tough and arrogant like a gang leader in real life, SO used to have a dream of becoming an actor. From the moment the two meet, there is tension in the air and a rivalry is born.

SO rose to stardom throughout Asia with leading roles in popular Korean dramas "Sorry, I Love You" and "Something Happened in Bali'. The distribution rights of "Rough Cut" is already pre-sold to Japan.

Director JANG has ties to Korea's maverick director Kim Ki-duk. KIM wrote and produced the film. KIM surprises with plenty of jokes, but the scenario is at the same time unmistakeably by the hands of KIM which will be a recommendation for some, but distance others. Ironically, KIM's successful humoristic inclusions unbalance the tough male oriented violence. "Rough Cut" hits Korean cinemas on September 11.

"SO Ji-sub on the silver screen"
by HanCinema is licensed under a Creative Commons Attribution-Share Alike 3.0 Unported License.
Based on a work from this source