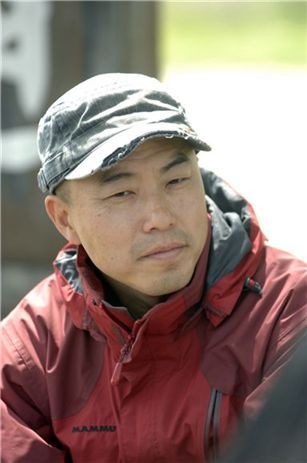 Producer Kim Jin-min-I attends a press conference for upcoming MBC TV series "Road No. 1" held at the drama's set in the Chungcheong Province of South Korea on May 12, 2010. [MBC]
Q: You've been aiming to finish shooting the entire drama before it goes on air. How much have you shot so far?
Lee: We've completed about 80 percent of it.

Q: The first episode goes on air June 23. Do you think you'll be able to get done by then?
Lee: From the script to the filming, we've been trying to do everything according to plan so we went into shoot after having prepared this for three years. We promised the actors and staff that we would wrap up the shoot by June 13 and intend on keeping it. We're doing everything in our power to become an exemplary case.

Q: I bet it's not easy.
Lee: To start with, it's not easy having to juggle everyone's schedule. The actors, as well as ourselves, have been trying our best to match each other's schedules. From the production aspect, we had to show all four seasons of the year so we started by filming the 12th episode in our first shoot which started January 5. Coming into spring, we've been shooting the episodes covered during both spring and autumn, and recently we've been going back and forth between episodes 1 and 16. But it's not really a big problem because our actors know all their lines.

Q: Why is it so important that you finish everything in advance?
Lee: I wanted to prevent the script of such a big production changing over and over again while being shot. It has to be better for both the staff and actors to be completely aware of what will happen rather than going in an entirely unexpected direction. And it'll help the actors make a accurate judgement of whether they really want to do the show or not.

Q: There definitely are advantages to pre-production but the disadvantage is that you can't communicate with the viewers.
Lee: Well, is it right to change the direction of the drama just because it's what the viewers want? Most certainly, the viewers own whatever goes on air but Korean dramas will never improve if you can't shoot dramas in advance because you're fearful of viewers' response. I wanted to break free from the practice of producing dramas without having a specific plan or going with the flow, and instead do a production where everything was given for the script and everyone moved according to schedule. Plus, that's what had to be done for this production.

Q: When you say 'that's what had to be done for this production', is it because it's a blockbuster production?
Lee: We need to think about what exactly 'producing' is about. Does it mean you're done producing if you manage to tell a story? If you shot the third episode for a drama in the week that the first two episodes were going out, all you would get to shoot are just the actors faces. Would you call that production? "Road No. 1" isn't a drama that can be shot like that. There is a huge amount of post-production work to do, such as for sound or the computer graphics. We're actually only done halfway if we've finished shooting. I regard production as completing everything, up to post-production work. Look at foreign dramas. The quality is guaranteed only when a show has time left for post-production.

Q: You said the quality of "Road No. 1" will be unlike that of any other Korean drama shown so far but people's standards are set to those of American dramas like "Band of Brothers". There are also a lot of military manias who are strict about historical evidence.
Lee: First of all, this is an issue of money. You can't compare the production cost that goes into making a show like "Band of Brothers" versus the cost for ours. For example, the T-34 was the main model of tank used during the Korean War. We needed at least ten of them but we were only able to make one. And that too cost a whopping sum of money. We placed that in the front and tanks from the Defense Ministry in the back, so I'm sure there'll be people pointing that out. And the staff in charge of props are young so they may think that the military equipment that was used before they were born are all the same. But the equipment used in the 50s, 60s and 70s are all different. So we may lack in that sense too. We also purposely avoided being too realistic. For example, on the uniforms we could've hung unit badges that soldiers wore on their military suits but we replaced it with the Korean flag because we thought it could make it tough for those who experienced the war to watch. But there'll be a lot of people who point that out too. Despite all that, we'll do the best we can. Though we know we have our limits.
Kim: I believe that our drama should be one that can heal many people with love. The war was so awful that no matter how realistically we show it, it doesn't erase the feelings of sorrow and resentment. I don't know how this may sound but I'm hoping the romance doesn't get covered by the war scenes. It'll be up to the viewers to judge whether the war scenes are of high quality.

Q: The fact that there is so much curiosity surrounding the quality of the show proves how much expectation there is toward it. As the producer of "Road No. 1", how well are you hoping it will do?
Lee: Of course I want it to score high ratings. I'm hoping it'll pass the 40 percent mark. I think our actors too will see good results at year-end awards ceremonies.