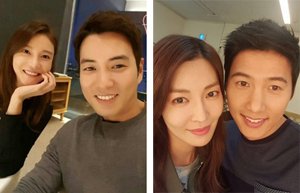 A number of star couples from TV soaps are becoming getting married in real life.

Joo Sang-wook and Cha Ye-ryun in a statement from their agency Wednesday said, "We have been preparing for our wedding quietly for some time. The wedding will take place sometime in May".

The two met on the MBC soap "Glamorous Temptation" in 2015, where they played a couple. They admitted their relationship in March last year when the soap finished.

And Lee Sang-woo and Kim So-yeon, who played a couple in MBC soap "Happy Home", on Tuesday announced that they will get married in June. They announced their relationship in September last year, one month after the show finished.