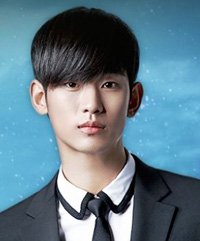 Soap star Kim Soo-hyun will keep endorsing a Chinese bottled water brand despite provoking the ire of Korean patriots because it is sourced from the mountain said to be the birthplace of the Korean race.

Kim, whose popularity in China soared with the recent series "My Love from the Star", appeared in a commercial for drinking water Hengda bingquan along with co-star Jun Ji-hyun.

The manufacturer claims the source of the water is the iconic Mt. Baekdu on the North Korean border with China. But the ad identifies the mountain by its Chinese name of Changbaishan.

Kim's agency in a statement Wednesday said there were "no political motives" behind the labeling of the source and decided to uphold the contract rather than reach "drastic conclusions".

Fans in Korea had accused Kim of becoming a pawn in China's alleged campaign to co-opt the ancient Koguryo and Balhae kingdoms of Korea. This had prompted Kim's agency, Key East, to request that the contract be cancelled.

Jeon's agency said it is in talks with Hengda Group to reach an "amicable solution".