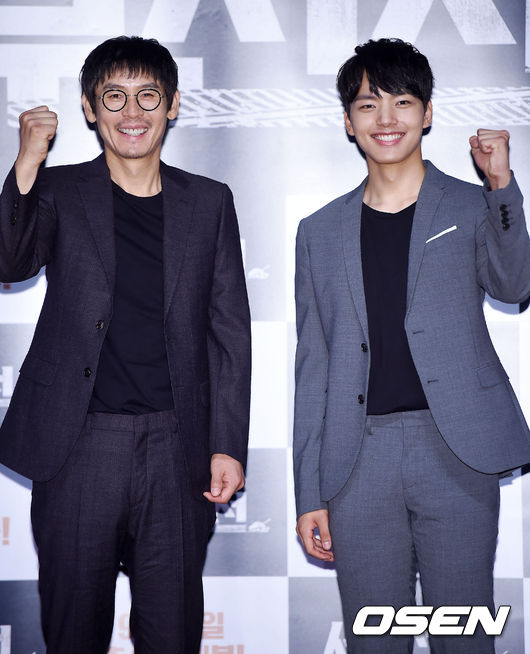 Flowers bloom even during a war. Although you may feel there's something missing because it is a bromance, not romance between a man and a woman, Sol Kyung-gu and Yeo Jin-goo's comical and impassioned acting performance fill up the gap. Right after they bring laughs in a comical scene, the audience is exposed to a painful agony of a war that a country had to experience. Laughs in a tragedy is always sad and funny at the same time.

It isn't that easy to make the audience laugh and smile in turn. First of all, it should be based on a good scenario that maintains the emotional thread throughout the storyline. And of course there should be the strong acting performances by great actors.

The two leading actors in "The Long Way Home" Sol Kyung-gu and Yeo Jin-goo bring on such funny scene through their almost perfect interaction. While the audience is laughing, they all of sudden become to realize the tragic reality of a war. However, there are no such tacky efforts trying to make the audience laugh hard and cry hard in turn intentionally.

"The Long Way Home" depicts a dangerous battle over a confidential military document, between a South Korean soldier, who enlisted by surprise while he used to be a farmer, and a North Korean solider, who learned how to operate a tank by a textbook only.

The South Korean private Nam-bok (Sol Kyung-gu) and the North Korean private Yeong-gwang (Yeo Jin-goo), who happened grab the document in his hands, encounter each other at west frontline. The movie depicts the efforts of the two comically, who carry out their mission so that they can return to each one's home safely.

The irreplaceable A-list actor Sol Kyung-gu and Yeo Jin-goo, who was awarded Best New Actor at Blue Dragon Film Awards for his role in "Hwayi : A Monster Boy", will show off their pleasant chemistry.

"Sol Kyung-gu and Yeo Jin-goo's bromance blooms in 'The Long Way Home'"
by HanCinema is licensed under a Creative Commons Attribution-Share Alike 3.0 Unported License.
Based on a work from this source